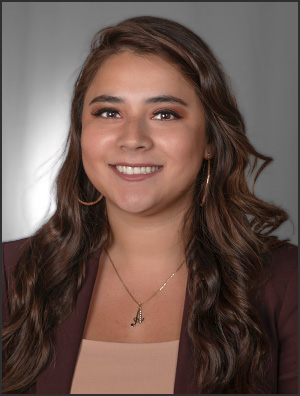 Alejandra Palacios Pérez started working in June 2021 as a bilingual reporter for CBS 58 and Telemundo Wisconsin.

Alejandra was born in Cancun, Mexico but grew up in Minnesota most of her life. She calls herself a “Mexican-Minnesotan."

She goes to Mexico often to visit her big family in Mexico City.

Alejandra earned her bachelors degree in Journalism at the University of Minnesota in the Twin Cities.

She moved to Duluth, Minnesota in 2018 where she worked as a reporter for WDIO-TV for three years. She has covered a variety of stories there, starting with a big story just a few months on the job with the Husky refinery explosion in Superior, Wisconsin, where she was sent on a helicopter to cover the explosion.

She has also covered hard news stories during her time in Duluth, including George Floyd protests, the COVID-19 pandemic, the death of two K-9's, a fire at a synagogue, snowstorms, health, education, politics, and popular sporting events like Grandma’s Marathon and the John Beargrease Sled Dog Marathon.

In her free time Alejandra enjoys traveling and exploring new areas. She loves to spend time with family and friends, go on walks, bike ride, try new foods and is especially excited about trying the great cheese and food in Wisconsin! She also enjoys catching up on her favorite shows on Netflix!

Alejandra says she moved to Milwaukee at the perfect time, with the Milwaukee Bucks in their prime and watching them win the NBA Championship. Although she’s in Wisconsin, she said she will always be loyal to her Minnesota Vikings.