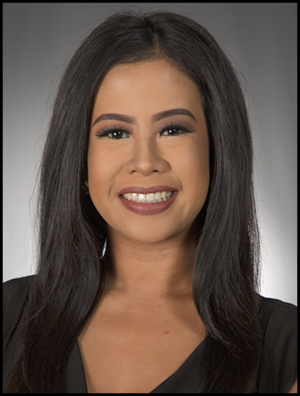 Cearron Bagenda moved to the United States from Indonesia at a young age, growing up in the suburbs of Chicago with her family.

She graduated with a BA from DePaul University in Chicago, where she made the honorary Dean’s List. At DePaul, Cearron was a reporter for the university’s TV news show, “Good Day DePaul” and was a member of the Society of Professional Journalists. She also interned for the legendary “Chicago Tonight” Show on WTTW11, a PBS affiliate in Chicago.

After Chicago, Cearron became an on-air reporter for KOTA, an ABC Affiliate in Scottsbluff, Nebraska. Cearron covered crime, features and breaking news. She also produced on the weekends and filled in for longtime noon anchor Jerry Dishong. Cearron helped launch NBC Nebraska in Scottsbluff, Nebraska. She also advocated for cameras in Nebraska courtrooms, which came to fruition in spring 2017.

Some of Cearron’s most notable stories include her coverage of the Body in a Barrel Homicide in Bridgeport, Nebraska as well as the Reed Brothers Homicide in Scottsbluff, Nebraska. Cearron has done investigative pieces into disability discrimination in the workplace, the rise of prescription drug abuse in Western Nebraska and EpiPen alternatives after prices surged.

After spending two years in Nebraska's panhandle, Cearron accepted a job with WBAY- an ABC affiliate, and the legacy station in Green Bay, Wisconsin. During her time with WBAY, Cearron covered the emotional sentencing of Jayme Closs’ kidnapper Jake Patterson. The Closs case garnered national attention. Cearron also covered a story about a special needs girl who was bitten on a school bus, the story gained international attention, shedding light on the need for stricter school bus regulations for special needs students. In Green Bay, Cearron enjoyed covering stories with the Green Bay Packers. During her time with WBAY, Cearron also fill-in anchored on weekend nights.

Cearron has traveled extensively through Europe and Asia, and has also been to Australia. Her favorite sports teams are the Chicago Cubs, Chicago Bears, and Chicago Bulls. Cearron is also a big animal lover and loves to spend time with her dog and two cats. Cearron has been a part of missionary trips in Arizona and Michigan through Calvary Church in Naperville, Illinois helping provide kids with school supplies and interacting with kids of abused families. She has also volunteered for the Girl Scouts of Western Nebraska for “Career Day,” giving young girls insight into television broadcast journalism.

She is passionate about the news industry and feels she has found her calling. Cearron is thrilled to be a part of the CBS 58 News team. If you see her, please say hello!