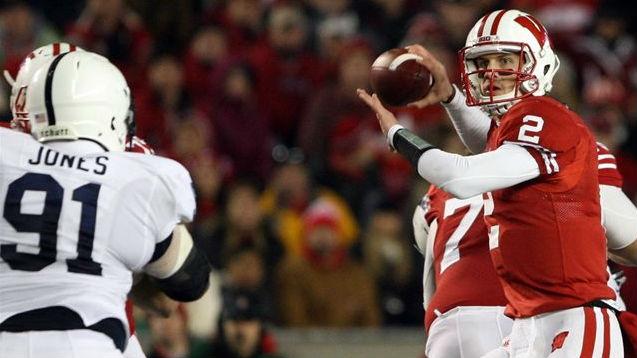 The Whitnall School District will recognize alumni Joel Stave, the all time winningest quarterback in the University of Wisconsin football history and National Football League prospect, at a jersey ceremony at 2:00 PM Thursday, March 10.

Stave, along with his family, will be recognized by the District when he presents Whitnall High School with a signed, framed No. 2 Badgers jersey in front of the school body and staff in the WHS auditorium, 5000 S. 116th St., Greenfield.

“We are thrilled to have Joel come back to Whitnall to be recognized,” Superintendent Dr. Lowell Holtz said. “It was awesome to see the things Joel was able to do when he played for our Falcons, and amazing to watch him on Saturdays with the Badgers. The school community feels an incredible sense of pride to call Joel our own, and as he embarks on a possible NFL career, it’s only fitting that we honor his accomplishments thus far.”

Stave was a first team all state selection by the Wisconsin Football Coaches Association, the Woodland Conference Black Division offensive player of the year and a NOW Newspapers All Suburban first team selection following his senior season in 2010. That fall, he passed for 2,635 yards, second most
in the state, along with 22 touchdowns. In his two years on the varsity, he compiled 5,017 yard with 40 touchdowns to just eight interceptions.

After leaving Whitnall early to join the Badgers, Stave went on to win more games than any other UW quarterback; his final college game, a 2321
victory over the University of Southern California Trojans in the Holiday Bowl gave him a final 3110 record with the Badgers.

The special jersey ceremony will include video highlights of Stave’s career, special guests and a performance by the Whitnall band. The event is open to the public, though all guests must sign in at the school’s front office.