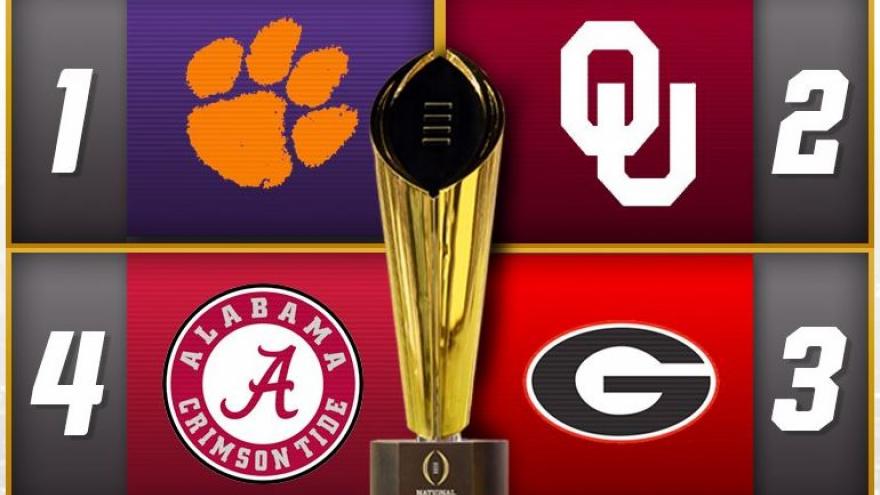 (AP) -- Alabama is in, winning the great debate over Ohio State to reach the College Football Playoff yet again.

The Crimson Tide got the nod Sunday for the fourth and final spot over Buckeyes and will play Clemson on Jan. 1 in the Sugar Bowl. Oklahoma and Georgia will meet in the Rose Bowl semifinal a few hours earlier.

Tide or Buckeyes was the question facing the selection committee, the toughest call in the four-year history of the playoff.

The Tide had been more consistent and lost just once. The Buckeyes lost twice, including an embarrassing 31-point loss at unranked Iowa, but have the more impressive set of victories. Ohio State won the Big Ten while Alabama did not even win its Southeastern Conference division.

The committee rolled with the Tide, and for the first time the playoff will include two teams from the same conference. Alabama joins SEC champion Georgia and an all-SEC title game on Jan. 8 in Atlanta is possible.

Ohio State was ranked fifth by the CFP, Wisconsin was sixth and Auburn was seventh. Southern California finished eighth, followed by Penn State and Miami. Washington was 11th and unbeaten UCF was 12th.

In the final AP Top 25 of the regular season, the Crimson Tide was No. 4 and the Buckeyes were No. 5. The poll was released about an hour before the College Football Playoff pairings were being revealed. Which team gets the final spot in the final four caused a debate between the Crimson Tide and Buckeyes. In the AP media poll, Alabama received 1,307 points to Ohio State's 1,300.

Committee chairman Kirby Hocutt said the Iowa loss hurt Ohio State and the Buckeyes were not close enough to the Tide for the Big Ten championship result — a 27-21 win over previously unbeaten Wisconsin — to matter.

The committee protocol states conference championships are to be considered it the teams are close, like a tiebreaker.

"In this case the margins weren't close enough to look at those other matters," Hocutt said.

Alabama (11-1) made it 4-for-4 in the playoff, the only team that has made them all. Coach Nick Saban told ESPN he trusted the committee would come to the right conclusion.

"I really do believe based on the total body of work that our team really deserved to be in," Saban said.

And for the third straight season, college football gets an Alabama-Clemson matchup in the playoff, though this time in the semifinals.

The Tide beat the Tigers in a classic national championship game in Glendale, Arizona, two seasons ago. The teams played another thriller last season and Clemson took the title in Tampa, Florida.

"Alabama's been the standard for a long time," Clemson coach Dabo Swinney said.

Ohio State coach Urban Meyer said he was not surprised that the Iowa loss cost the Buckeyes.

"I was kind of hoping we had those good wins. Three against the top 16 teams in America," Meyer told ESPN. "But I get it."

He added: "The bottom line is we had a tough road loss."

Clemson (12-1) is making its third straight playoff appearance, but first without star quarterback Deshaun Watson. The Tigers won another Atlantic Coast Conference championship with Kelly Bryant as the quarterback.

Georgia (12-1) and Oklahoma (12-1) have never played. The Bulldogs have surged in their second season under coach Kirby Smart. After winning eight games last season, Georgia won the SEC for the first time since 2005.

Oklahoma is in the playoff for the second time and will likely bring the Heisman Trophy winner. Quarterback Baker Mayfield is the favorite to win the award next weekend. If so, Mayfield will be the third player to go from winning the Heisman on to the playoff, joining Oregon's Marcus Mariota in 2014 and Alabama's Derrick Henry in 2015.

The Alabama-Ohio State debate was the trickiest of the playoff era. Most talented or most accomplished? Neither team neatly matched precedent. Ohio State made it to the playoff without even playing in its conference title game last season, but those Buckeyes had a more convincing resume, with three victories against top-10 teams. Alabama could not match that.

Not only had no team ever made the playoff with two losses, but none had as ugly a stain on its resume as Ohio State's 31-point loss at Iowa. Tide coach Nick Saban mentioned it Saturday night on ESPN as the selection committee went to work for the last time this season.

That the most controversial playoff pick yet came down to these two teams made it an even juicer plotline. Alabama has dominated college football for a decade since Saban took over. Ohio State is one of the few teams to interrupt the Tide's championship machine during the Saban era, beating the Tide in the semifinals in 2014 on the way to a national title.

In the Top 25 released earlier Sunday, Alabama was fourth by a mere seven points over No. 5 Ohio State, but the committee's process is not the same as the traditional polls. The panel of 13 includes former and current athletic administrators, including the athletic director from Ohio State, and former coaches.

In 2014, fans of TCU and Baylor were upset when Ohio State jumped the Texas schools on championship weekend. Last year, Ohio State was involved in a bit of a controversy again when it didn't win its conference but got in. The final spot came down to Penn State and Washington and the Huskies won out.