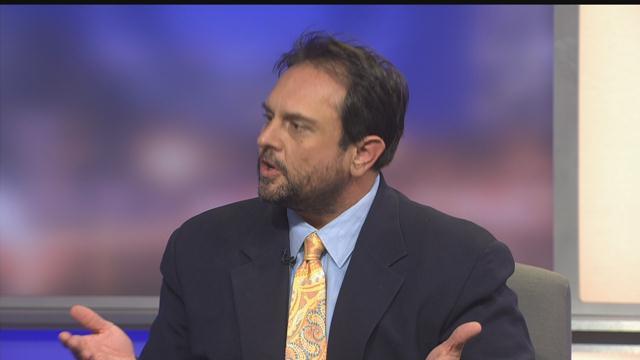 At the request of CBS 58 News, Wisconsin Lawmaker Joel Kleefisch, R-Oconomowoc, sat down to respond to statements made by Milwaukee Police Chief Ed Flynn that the legislature is hostile to the interests of Milwaukee.

"There's no question that we have made a valiant focus on Milwaukee in these past few sessions," Kleefisch said during a live interview on the CBS 58 News at 4. "Specifically, on some of those initiatives Chief Flynn came to the legislature and asked for."

Kleefisch pointed out that shot spotter was funded by the state and that he worked with Milwaukee Democrat LaTonya Johnson on a bill that set stiffer penalties for felons caught with guns.

"Ten years mandatory minimum to slow down the revolving door of justice that was happening in Milwaukee," explained Kleefisch. "Chief Flynn was there. He stood side by side with us as those bills were signed into law."

In a fiery address before the Milwaukee Press Club, Flynn said urban issues had been taken off  the national and state agenda.

"In too many states, in Milwaukee and St Louis, the urban centers are living in states where the legislatures are actively hostile to their interests," declared chief Flynn. "It's a replication of the early years of the 20th century when the urban centers were filled with immigrants from foreign places speaking strange tongues and the legislatures were full of so called Native Americans, non-Indians, who lived in rural areas and dominated the legislature and passed laws that the urban areas found unenforceable and inappropriate."

State Representative Kleefisch said the Chief has got to take an introspective look.

"What's very frustrating is that he's either not done his research, or he has a very short memory," Kleefisch told CBS 58's Michele McCormack. "I think possibly he's gotten so frustrated with the situation he's in in Milwaukee, with the high crime rate, and he's looking for someone to blame. It's not the legislature or the governor. We've worked across the aisles."

Kleefisch who is chairman of the Criminal Justice Committee said he specifically reached out to Milwaukee lawmakers so that the public could be assured that everyone's needs were being addressed.

"We know a bunch of middle aged white guys from the suburbs are not going to solve Milwaukee's problems," acknowledge Kleefisch.

He said right now there's work being done on measures to come up with hubs in the city to make sure folks who want to work and stay on the straight and narrow can get to their jobs.

He said a proposed wheel tax by County Executive Chris Abele could hurt that targeted group the most.

"We've got a wheel tax that's a regressive tax," sad Kleefisch "It's going  hurt the poorest citizens who just want to drive a car and use that car to maybe get  get to their job."

The issue of who should pay and how much for more police is especially contentious.

"Sure more cops would help," Flynn said on Thursday. "But the local taxpayer shouldn't have to freight 100%  of the bill when the entire state depends on Milwaukee's productivity, uses its amenities and the people who live here happen to be residents of the state. Everybody needs to pitch in. It's the height of hypocrisy to put it on that mayor or this mayor or the other. Everybody else says not my problem. You know damn well if there's a tornado in 'I don't know where Wisconsin' the money we've poured into the state for our taxes, that money is going to go out there and nobody's going to blink an eyelash."

Kleefish immediately brought up the $57 million for trolley maintenance. And rebuffed any nothing that cops and the trolley are separate issues.

"Take a look at what he's saying. He's saying don't blame the mayor and yet the mayor's saying spend $57 million in order to maintain a trolley through downtown is literally more important than adding officers. Money is money and 57 million puts a lot of police on the streets."

He later conceded that at least 20 of that 57 million was coming from the federal government.

Despite the strong words as of late, his door will always be open.

"The door will always be open," Kleefisch promised. "He bad mouths us and then comes back and knocks on the door and asks. But the reality is, if it will make the state a better, safer place, we're willing to do it."