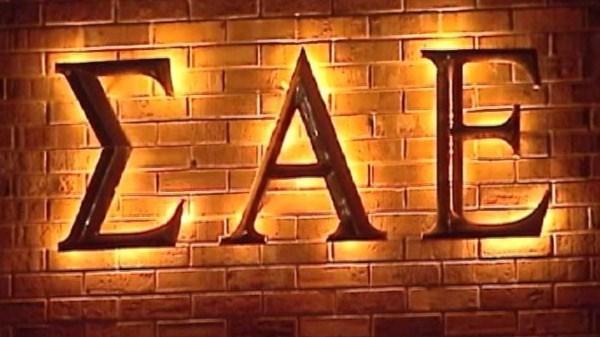 Members of Sigma Alpha Epsilon fraternity at the University of Oklahoma have until midnight Tuesday to pack their bags and get out of their house after a video showed them chanting a racial epithet on the way to a party.

It was only a nine-second clip, but the fallout has been disastrous.

The national chapter of SAE shuttered the house at OU, and school President David Boren said the university's affiliation with the fraternity is permanently done.

\"I was not only shocked and disappointed but disgusted by the outright display of racism displayed in the video,\" said Brad Cohen, the fraternity's national president. \"SAE is a diverse organization, and we have zero tolerance for racism or any bad behavior.\"

Still, it could get worse. Oklahoma may not be the only source of embarrassment for the fraternity.

\"Several other incidents with chapters or members have been brought to the attention of the headquarters staff and leaders, and each of those instances will be investigated for further action,\" SAE said.

The national chapter didn't provide details of the alleged incidents or where they are said to have taken place.

\"The house will be closed, and as far as I'm concerned, they won't be back,\" he said at a Monday news conference. The university also is exploring what actions it can take against individual fraternity members.

\"There seems to be a culture in some of these fraternities, and it just has to be snuffed out,\" Boren told CNN.

The video shows students on a bus, clapping, shouting and chanting. \"There will never be a ni**** SAE. You can hang him from a tree, but he can never sign with me.\"

Both the student newspaper, The Oklahoma Daily, and Unheard, a campus organization launched after the police shooting in Ferguson, Missouri, received the video over the weekend and released it.

The decision to shutter the fraternity was an easy one for Boren.

\"If we're ever going to snuff this out in the whole country, let alone on college campuses, we're going to have to have zero tolerance and we have to act right away,\" the former Oklahoma governor and U.S. senator said.

\"This is not a place that wants racists or bigots on our campus or will tolerate it, so I think you have to send a very strong signal.\"

Unheard organized a protest after the video was released.

\"Proud to stand with @OU_Unheard,\" tweeted OU student Alex Grant. \"Proud to be a Sooner.\"

The Oklahoma football team joined the outpouring with a demonstration of its own.

Coach Bob Stoops marched arm in arm with players across campus, instead of practicing.

\"I was angry and I was outraged,\" Striker told CNN's Don Lemon. \"I apologize for the profanity, but I'm not apologizing about how I felt, because that's how I felt in my heart.\"

The fallout from the video also cost the football team a top recruit.

Offensive lineman Jean Delance said Monday he was de-committing from the Sooners and considering other teams.

At a news conference, Boren said the school was looking into punishing the people involved, especially those \"who have taken a lead\" in the chanting.

While expulsion is an option, any punishment must be \"carefully directed\" if it's to pass constitutional muster. One key will be whether the offending students created a hostile environment on campus, he said.

Boren said \"there is no room for racists and bigots\" at the university.

\"I think some of the students themselves may take themselves off the campus, and I hope they do because this is not a place that wants racists,\" he told CNN later.

While the university explores its legal options, the OU facilities team wasted little time ripping the Sigma Alpha Epsilon letters off their home. Earlier, the house was vandalized with spray paint.

Unheard co-director Chelsea Davis said a racist mentality is not new to campus and is not confined to one fraternity.

\"Unfortunately, it took them getting caught on video camera for this to happen, but this is definitely not something that is brand-new. It's not something that's only seen within this one organization,\" she said.

Davis said the only acceptable response is to expel -- not suspend, as that would send the wrong message -- all the students involved.

\"I was hurt that my fellow peers that I walk to class with every day, people that I see every day, could say such hateful things about me and my culture, about my friends, about my brothers and my sisters,\" she said.