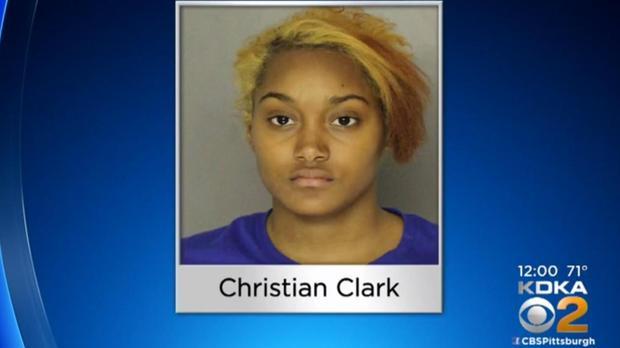 (CBSNews) PITTSBURGH -- A woman jailed on charges she killed her toddler son sent a video of the boy’s apparently lifeless body to his father in a jealous, vengeful rage during a text-messaged argument that lasted more than two hours, police said in a criminal complaint.

Christian Clark, 21, of McKeesport, was jailed without bond after being arraigned on charges of criminal homicide in the death of 17-month-old Andre Price III and attempted homicide of his 2-year-old sister, Angel. Clark doesn’t have an attorney listed in online court records.

Allegheny County homicide detectives say Clark was arguing with the boy’s father, Andre Price Jr., when she started sending increasingly violent text messages beginning about 9 p.m. Tuesday. The complaint indicated Clark was upset at having to clean up toilet water the children spilled but mostly because Price had left for work earlier in the day and Clark believed he planned to have sex with another woman.

“Ya kids ain’t safe here I don’t want them here” and “Answer me or im going to jail for child endangerment” were two of the dozens of texts listed in the criminal complaint. Then came a message at 10:01 p.m. that said, “I’m killing them” - followed by a laughing emoji with tears coming from its eyes, police said.

At various points, Clark also texted photos of each child - including one of the boy face-down on an air mattress with his face in a comforter.

By 10:14 p.m., Clark sent the first video, showing the children lying face-down with Clark narrating, “Ahh look Angel is still alive and sweating your son on the other hand is not even breathing, I wish I could keep the camera still.”

“First of all she is clearly fine, because watch, see she is not dead. Him on the other hand, he doesn’t budge. So you might want to call the ambulance,” Clark said in the video. A minute later she texted, “All cus you wanted to go (have sex with) her & come here when you like.”

At 10:23 p.m. Clark acknowledged she’s responsible for the boy’s death - and police say she later admitted smothering the boy by holding him face-down on the air mattress for about a minute.

“Im sure it’ll hurt me one im sitting in jail & you got all the evidence you need to I can’t even say he suffocated in his sleep or say idk what happened,” Clark texted.

Price responded only six times in the texts printed in the complaint, at one point promising to take a bus home but at other times ignoring Clark’s threats to harm his children. Only after Clark sent a third video at 11:09 p.m., showing her picking up the boy’s limp body by the arm and tossing him on the bed, did Price ask Clark to try to revive him, the complaint said.

“You need to if he dead,” Price said.

County police Superintendent Coleman McDonough said the couple lived together only some of the time.

“It just goes to show how texts have become such a routine part of our lives that people don’t even realize the nature of what they’re communicating,” McDonough said.

He said authorities did not expect to file any charges against Price, but the investigation is continuing.

Homicide detectives say Clark told them at a hospital that the boy was healthy and had no known medical conditions. She denied harming the boy until police interviewed her again at their Pittsburgh headquarters and told her they had seen Price’s phone and the texts and images she sent.