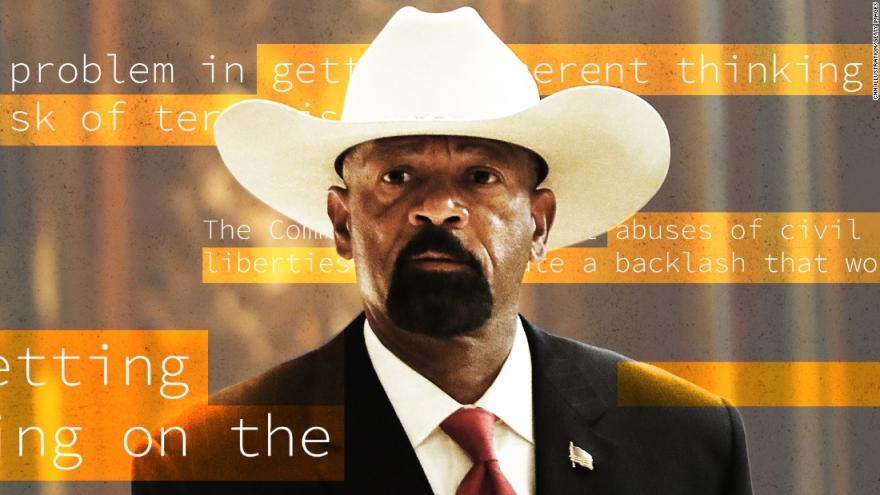 (CNN) Controversial Milwaukee County Sheriff David Clarke, who this week announced he will be joining Donald Trump's administration as assistant secretary in the Department of Homeland Security, plagiarized sections of his 2013 master's thesis on US security, a CNN KFile review has found.

Clarke, a visible surrogate for Trump during the campaign known for his incendiary rhetoric, earned a master's degree in security studies at the Naval Postgraduate School in Monterey, California. In his thesis, "Making U.S. security and privacy rights compatible," Clarke failed to properly attribute his sources at least 47 times.

In all instances reviewed by CNN's KFile, Clarke lifts language from sources and credits them with a footnote, but does not indicate with quotation marks that he is taking the words verbatim.

According to guidelines on plagiarism posted on the Naval Postgraduate School's website, "If a passage is quoted verbatim, it must be set off with quotation marks (or, if it is a longer passage, presented as indented text), and followed by a properly formulated citation. The length of the phrase does not matter. If someone else's words are sufficiently significant to be worth quoting, then accurate quotation followed by a correct citation is essential, even if only a few words are involved."

The school's honor code defines plagiarism as "submitting material that in part or whole is not one's own work without proper attribution. Plagiarism is further defined as the use, without giving reasonable and appropriate credit to or acknowledging the author or source, of another person's original work, whether such work is made up of code, formulas, ideas, language, research, strategies, writing or other form(s)."

Sources Clarke plagiarized include a 2002 ACLU report about "The Government's Demand for New and Unnecessary Powers After September 11," a 2003 ACLU report critical of the FBI's records-collection practices, a 2007 ACLU report on "fusion centers," and a 2011 ACLU report on the need to overhaul secrecy laws.

Other sources Clarke lifted words from include: the 9/11 Commission Report, a 2011 article in the Homeland Security Affairs journal, the Pew Research Center, a 2012 report by the Constitution Project, a 2003 report by the US General Accounting Office, a 2011 Brennan Center report, a 2013 Washington Post article about the Foreign Intelligence Surveillance Court, Comparative Homeland Security: Global Lessons, a textbook by Nadav Morag, and Safe Cities Project, a research paper published by the Manhattan Institute.

Clarke announced on Thursday that he had received the appointment to the DHS "office of partnership and programs" where he will serve as a liaison with law enforcement at several levels across the country. A spokesperson for DHS later said Thursday that no announcement had been made regarding Clarke's appointment.

Clarke is known for his eyebrow-raising comments, including calling Black Lives Matter a hate group and calling the organization "Black Lies Matter." Clarke has also faced criticism for his management of a Milwaukee County Jail, where local prosecutors say an inmate died of dehydration after going a week without water.

After CNN's KFile attempted to contact Clarke for comment on this story, he took to Twitter, writing, "This @CNN hack @KFILE oppo research MO is to accuse plagiarism. I'm next. Did it to Rand Paul, Monica Crowley et al."

In a statement, a spokesperson for the Naval Postgraduate School said standard procedure would be to launch an investigation into a thesis when allegations of plagiarism are made.

"Like all academic institutions, the Naval Postgraduate School takes the integrity of our students' work very seriously, perhaps even more than our peers given the unique nature of our mission and student body," Lt. Cdr. Clint Phillips said. "Standard procedure to any formal accusation of plagiarism is to pull the student's thesis, and perform an investigation into the validity of the claims."

"The university's academic conduct code, and our procedures in checking for plagiarism at the time of thesis submission, and following graduation, can change from year to year. In this particular case, we would be unable to determine any violation until the full investigation is complete."

Click here to read the full CNN report including examples of the alleged plagiarism.