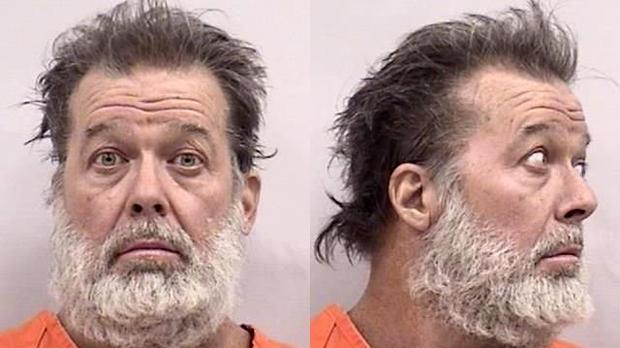 (CBSNews) Colorado -- The two civilian victims killed in the shooting at a Planned Parenthood on Friday in Colorado were a woman and a man, one of them an Iraq War veteran, reports CBS Denver.

That officer, Garrett Swasey, was a member of the University of Colorado Police Department in Colorado Springs. Five other officers and four civilians were wounded in the attack.

The father of Jennifer identified her as the second civilian killed. On Facebook, he wrote, "I miss you my daughter, life was too short."

"I'm crushed, man. Just crushed," he said. "Almost half a million people here and it happened to be my brother out of all these people-- random."

Stewart's sister, Temprest Llyod, told CBS affiliate KKTV that Stewart was outside Planned Parenthood making a phone call because he didn't have service in the building. He was shot by the gunman, ran inside and was the person who told everyone to get down, get into rooms and called 911.

Stewart was accompanying someone at the clinic when he was killed, said Amburh Butler, a lifelong friend and family spokeswoman.

Stewart leaves behind two girls, 11 and 5, who live in Texas.

Stewart and Butler met when they were 11 in Waco, Texas and were high school sweethearts, she said.

They both joined the Army, but Stewart joined first, right after his high school graduation in 2004, she said. He served in the Fourth Infantry Division and was deployed to Iraq, where he would often send her letters describing the horrors he saw on the front lines.

"He would tell me how terrible it was, how many guys he watched die. It was terrible for him," Butler said.

The Army stationed Stewart at Fort Carson in Colorado Springs in 2013, she said.

He was discharged from the military the following year. "He went someplace where people expect to die, only to come back ... and be killed."

Butler said she last spoke to her friend on Thursday, when he sounded upbeat to be spending Thanksgiving with friends.

"He was just a standup guy, he would take a bullet for you," Butler said. "He was the most sincere person I'd ever met."

A dramatic standoff with police ended after five hours.

The suspected gunman, Robert Lewis Dear of North Carolina, is in custody. He was booked into the El Paso County Jail, was being held without bail and was scheduled to appear in court Monday.

Sources told CBS News that Dear surrendered Friday after realizing that he was cornered and had nowhere to run. Since then, he's been cooperating with investigators.

Frightening moments were captured on police scanners after authorities say Dear opened fire on officers who were responding to reports of an active shooter:

"He's shooting at you as you coming in."

With the gunman still on the loose inside the Colorado Springs Planned Parenthood, police were able to rescue people hiding inside the building, including Katanya Craion.

"I heard everyone in the lobby screaming 'get down, get down,' and then I saw the gunman walking with a shotgun just shooting randomly," she said.

Said Ozy Licano: "He was aiming for my head. It's just weird to stare into the face of somebody like that, and he didn't win."

"While this was a terrible, terrible tragedy," said Colorado Springs Mayor John Suthers, "it could have been much worse but for the actions of the first responders, particularly the police officers involved."

The situation was further complicated because law enforcement was concerned the gunman brought explosives.

Swasey, the officer who died, leaves behind a wife, a son and a daughter.

"The family of Officer Garrett Swasey sincerely thanks everyone for their support during this very difficult time. Our loss cannot be expressed in words. While the nation now knows Garrett as a hero who gave his life for others, he was also a devoted husband of 17 years and a wonderful father to his two children," Swasey's family said in a statement.

In a press release, Dawn Laguens, executive vice president of Planned Parenthood Federation of America, said: "It is offensive and outrageous that some politicians are now claiming this tragedy has nothing to do with the toxic environment they helped create. Even when the gunman was still inside of our health center, politicians who have long opposed safe and legal abortion were on television pushing their campaign to defund Planned Parenthood and invoking the discredited video smear campaign that reportedly fed this shooter's rage."

As he was being led away following the deadly assault Dear reportedly told officers: "no more baby parts."