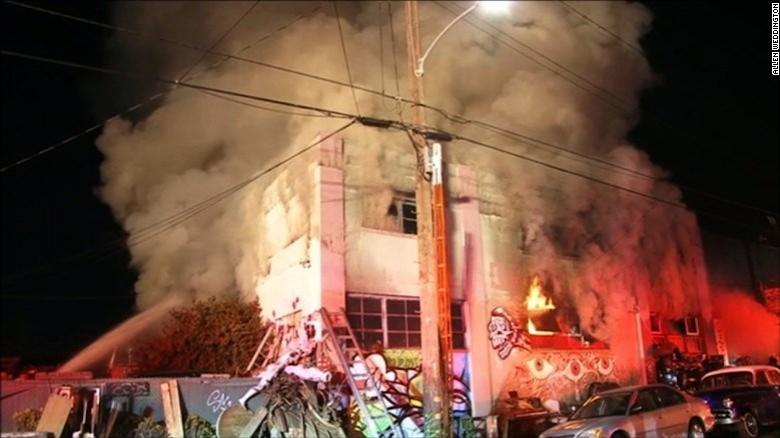 (CBSNews) OAKLAND, Calif. – At least 24 people have been confirmed killed in the Oakland Ghost Ship Warehouse fire, Sgt. Ray Kelly of the Alameda County Sheriff’s Office said on Sunday after about 20 percent of the wreckage had been searched and deceased victims of a deadly blaze were located.

“We anticipate the number of victims will rise,” he said.

Battalion Chief Melinda Drayton said authorities took a somber approach in their search for victims, and described it as quiet.

“It was heartbreaking,” she said.

She said authorities are going to remain on site for a few more days and that there’s a lot more to do. Kelly said people are working around the clock.

“What we were able to accomplish in 12 hours was a phenomenal feat,” Drayton said.

The tragedy has the potential to be the worst concert fire disaster since the Feb. 2003 blaze at the Station nightclub in Warwick, Rhode Island.

At the fire scene, workers were forced to cut several new entryways into the building to allow searchers across to the artist collective that consisted of a maze of small work spaces on the first floor, CBS San Francisco reported.

They set up massive spotlights to continue a search they said would last at least 48 hours.

The converted warehouse where the scene of horrors unfolded on Saturday was known as the “Ghost Ship,” and it served as illegal home and workspace for a rotating cast of a dozen or more residents, those who lived there or visited often said.

Former residents said it was also a death trap with few exits, a rickety makeshift staircase, piles of driftwood and a labyrinth of electrical cords. The ground floor had five recreational vehicles and other nooks used as living spaces that were rented out to tenants, while the upstairs had space for concerts like the deadly party that drew up to 100 people Friday night.

With few lights, the place could be pitch black. One staircase led to a boarded up door. The water and electricity were stolen from neighbors and often didn’t work.

Laura Hobbs attended the party with friends and told of the panic and difficulties of those attempting to escape the deadly flames.

“The building itself was an art piece,” she said. “The walls were completely covered with makeshift pieces of wood, so finding the staircase if you’d never been there before was difficult because they had built it into the wall in a certain way.”

“If you were not familiar with the building and the way that it was, if you were going there for a party, you wouldn’t be aware of the maze that you have to go through to get out,” said Danielle Boudreaux, a former friend of the couple who ran the warehouse.

Boudreaux identified the operators of the collective as Derick Ion Almena and Micah Allison. She said she had a falling out with Almena when she persuaded Allison’s parents and sister about a year ago that the warehouse was a dangerous place for the couple’s three children to live. The couple charged tenants enough to cover the warehouse rent and used proceeds from parties to pay their own living expenses, Boudreaux said.

A man identified as Derick Ion posted a Facebook message early Saturday, saying “Everything I worked so hard for is gone. Blessed that my children and Micah were at a hotel safe and sound.” He drew rebukes online from others who said he was warned the building was unsafe. CBS San Francisco reports that officials want to talk with him.

Almena did not immediately respond to emails sent to addresses affiliated with him, the Associated Press reports. Phone numbers either rang continually or were disconnected.

Oakland officials said they had opened an investigation just last month into the warehouse after repeated complaints from neighbors who said trash was piling up and people were illegally living in the building, which was zoned as a warehouse.

Darin Ranelletti, of the Oakland Planning Department, said the city opened an investigation Nov. 13 and an investigator went to the premises on Nov. 17 but could not get inside. The city has not confirmed people were living inside.

Online records listed the building’s owner as Nar Siu Chor. The Associated Press could not locate a telephone number for her Saturday and efforts to reach her at other Oakland addresses associated with her were not successful.

Shelley Mack said she lived there about two years ago, staying four or five months. She said she wasn’t told the residence was illegal until after she moved in, when she was instructed to tell visitors it was a 24-hour workspace for artists.

When outsiders or inspectors planned to visit, residents would scurry to hide clothes and bedding, Mack said.
“It’s like a horror house. Just horrors in there,” she said, referring to things such as no electricity, running water and freezing temperatures.

Alastair Boone, 22, a University of California, Berkeley student arrived at the party with five friends around 11 p.m. and had just received a tour of the property and stepped outside before the fire broke out.

“In a couple of minutes there were flames coming out of the windows and black smoke was just billowing out of the house,” she said.

It’s unclear what sparked the fire, but officials said the clutter served as a tinderbox and there were no sprinklers inside.

Alameda County Sheriff’s Sgt. Ray Kelly said people either escaped from the building or died inside, where the only way down from the second story was via a stairwell constructed entirely of wooden pallets. “It appears that either you got out or you got trapped inside.”

About 50 to 100 people were believed to have been at the party when the fire started around 11:30 p.m. Friday, officials said.

“We know there are bodies in there that we can’t get to - that have been seen but not recovered,” Kelly said.

Monica Kat, a paralegal, feared four of her friends were dead.

“We we were all checking in looking for them and they’re still not accounted for and I can only think the worst at this point,” she said.

Dan Vega had been unable to find his 22-year-old brother or his brother’s girlfriend.

“I just want to go over there. I have my work boots on. I’m ready to go,” Dan Vega said.

Oakland police urged those concerned about missing people, and those who have made contact with loved ones previously missing, to call the Alameda County Sheriff’s Coroner’s Bureau at 510-382-3000.

Oakland’s professional sports teams joined relief efforts. The Golden State Warriors had a moment of silence for the victims before their Saturday night game against the Phoenix Suns.

“It’s hard to comprehend, but as an organization we just want to send our thoughts and prayers to the victims, their families, friends, people who were injured,” said head coach Steve Kerr at a pregame news conference.

Others said they would make donations.