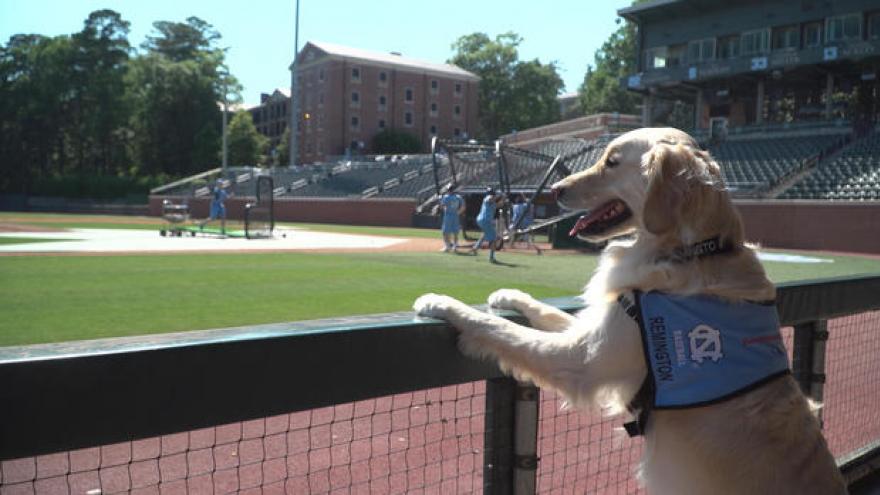 (CBSNews) On the University of North Carolina's second-seeded baseball team, there are right-handed pitchers and left-handed pitchers. There are first basemen and shortstops, outfielders and infielders. And now, there's a service dog on the roster as well.

That's right: The UNC baseball team just became the first NCAA team in the Atlantic Coast Conference — and possibly even the country — to boast a team service dog. He's a nearly 3-year-old golden retriever. His name is Remington — Remi, for short — and he's a trained psychiatric, medical alert, facility, rehabilitation service dog, to be exact.

"He tends to go towards people that have higher anxiety," explains Terri Jo Rucinski, Remington's owner and UNC baseball's head athletic trainer. "When we're walking through the hallways, sometimes he'll just anchor, which means he'll just come and sit in front of them. He'll just pick a random person in the hallway and I look at their athletic trainer and he's like, 'Well, he's not starting today,' or, 'He's hurt.'"

As a highly trained paws4people service dog, Remington can just sort of sniff out that type of thing. He can also go alert someone if a player is hurt, brace to help people get out of chairs after surgery, and assist players with their rehab exercises.

"He'll lay down with them on the floor when they're stretching or he'll bring them objects to do exercises with," explains Rucinski, who took Remington home this August. And she says that canine interaction during the players' physical therapy has worked wonders on both their mental well-being and, ultimately, their physical recovery.

"Sometimes, when people are hurt, they can get into, you know, kind of a depressed mode, where they're not a part of anything, but he just kind of uplifts everybody. They kind of turn the corner. They get off medications quickly and, as they say, it's all sunshine and unicorns," she laughs. "I don't know what to say about that because we've had, you know, kids have surgery in the past, but this year, it's just been different. We really don't have too many kids on our injury report right now and, last year, we had pages. He's the only thing that's different."

Junior Hansen Butler, one of the team's right-handed pitchers, underwent surgery on his right shoulder this year, and says that having Remington there to work through it with him helped tremendously.

"It kind of took my mind off of the big picture," explains Butler. "Rather than looking at it like, 'Oh, I have to come in here and I've got to do therapy and rehab and stuff like that,' it's more like I get to go do my exercises and my therapy with a dog, and especially a dog like Remington. So, it's been a lot of fun and just kind of makes me take it day by day. Every day, I get one step closer and he kind of just takes my mind off of it."

"He's helped me a lot," the MLB prospect told CBS News. "I had surgery in the fall of 2016. I had a sports hernia surgery, so a lot of my rehab was done with exercise balls and bands. So, he would always bring those over to me or kind of wait 'til I was done using them and then I'd throw them. It was just good having him around as kind of an encourager and just something to take your mind off an injury. It's pretty tough being injured. It's not really what you want, but having Remington there was definitely pretty cool."

Miller says Remi's positive presence on the team may have even helped the players get their grades up.

"I think we had one of our best semesters academically. I don't know if that's a direct correlation with Remington being here, but he takes the stress off you. Especially with classes and ballgames at the same time, there's a lot on your plate. So, being able to see a familiar face that you know is going to be there every day is just something to put a smile on your face and something to encourage you, whether you realize it or not."

But Remington's duties aren't all so weighty. He has crowd-pleasing tasks to execute on game days, as well.

"He will take balls out to the umpire before the game starts," explains Rucinski. "He'll sit with the boys for the national anthem and hold his hat... And then he'll help me take water out to the umpires during the game."

Rucinski also taught the pooch how to fist-bump his teammates before a game.

"He can high-five also, but the boys said he couldn't reload his high-five fast enough. So, I taught him to fist-bump," she says. "So, they'll come in and they'll fist-bump him and high-five everyone else when they come into the dugout before the game starts."

For the folks at the nonprofit paws4people foundation, where Remington was trained, it's been a joy to watch Remi grow in his new role at UNC Chapel Hill.

"It's just really awesome to see that eventually he'll be impacting hundreds of people every year," says Danielle McPhail, paws4people's chief administration officer. "Not only does he get to work with the baseball team, but Terri Jo uses him in her physical therapy office. They're going to start doing after-school reading programs with children that might be struggling. So, while it's great that we have dogs that do choose one person and work with them their whole life, Remington's helping Terri Jo, but he's helping so many other people along the way and I think that's a really big deal."

Paws4people currently places between 40 and 50 dogs with clients every year. They do it completely free of charge to the client. And they let the dog choose its person.

"We don't make a dog do something that they wouldn't want to do," explains Sam Cleary, marketing and events coordinator at paws4people. "So, we always let our dogs decide what kind of job they're going to work with. Some dogs just prefer children. Some are drawn to veterans. And some are drawn to facilities where they're going to work with many people: children, athletes, nursing homes, psychologists, counselors."

Remington, it seems, was destined for work with athletes — lots of them. And so far, he's been hitting it out of the park.

"When he's with our team, it's priceless really," says Terri Jo Rucinski. "The boys have just kind of integrated him into the team. He's really not a distraction at all. He's just part of them. They'll come in here and play with him or do some of his command sets with him, you know, if they've had a bad day at class or a stressful exam. During the exam period, was huge in here. There was a lot of them coming in to pet him. I said we should have a list on our injury report that says, you know, 'coming in for treatment' or 'coming in for Remington' because most of them are coming in for Remington now."