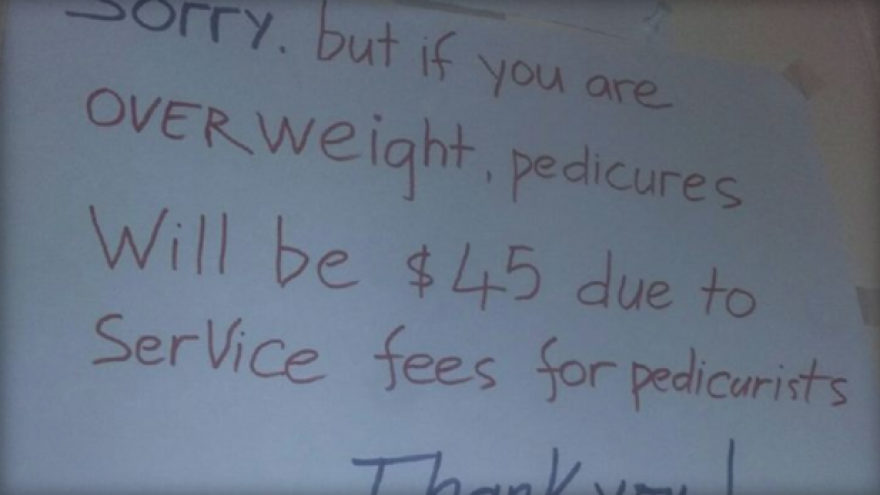 (CBS NEWS) Underneath a paper “cash only” sign in a nail salon in Memphis, Tennessee, hung a poster board with a handwritten note that has angered hundreds, including resident Deshania Ferguson who posted a photo of it on Facebook earlier this month.

Written in red marker, the sign read, “Sorry, but if you are overweight, pedicures will be $45 due to service fees for pedicurists.”

The salon, Rose Nails in Frayser, normally charges up to $30 for a pedicure.

Since the picture was posted to Facebook, it has been shared by hundreds of people. And like Ferguson, many of those who saw the photo agreed that it was “so rude,” and questioned what the salon meant exactly by “service fees.”

Days after the post went viral and the salon was flooded with complaints, CBS affiliate WREG in Memphis went inside to investigate. They didn’t see a sign, but they did find the owner, Son Nguyen.

When they showed him the Facebook post, Nguyen denied the sign was ever up in his business. However, he did tell WREG that he has considered hanging one in the past.

“I’m thinking but I don’t put it up,” replied Nguyen when he was asked if the sign was ever present in his store.

“So this isn’t your business? Even though the floors and chairs match? The sign was never in your business?” a reporter asked Nguyen about the photo.

“No, there are same walls and floors everywhere, it could be anywhere,” he said.

Nguyen, who has been managing the store for nearly a decade now, said he’s decided to just not service someone if they’re severely overweight, explaining that it’s difficult for technicians to give them pedicures and they’ve even broken chairs — which, he notes, have cost him $2,000 to $2,500.

Regardless, customers say Nguyen should treat overweight people like anyone else.

“Why patronize a business where they are rude and disrespectful, know your worth,” one Facebook user commented. “They need your money and should treat you with respect and appreciation.”

“They ought to be able to get services like any other person,” another added.