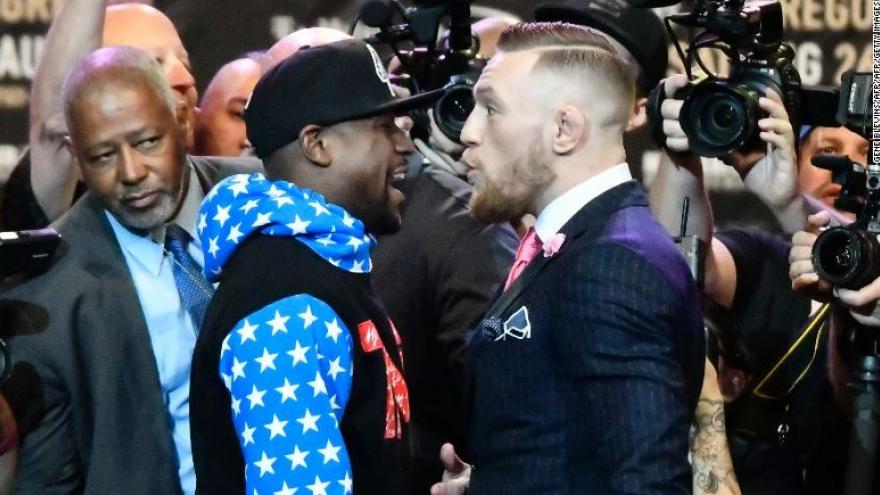 LAS VEGAS (CBS News) -- The sport of boxing could get a shot in the arm by crossing over with another combat sport in Las Vegas Saturday night. Undefeated boxer Floyd Mayweather, Jr. takes on mixed martial artist Conor McGregor, in one of the most-anticipated fights in years.

Both fighters are super-welterweights but the showdown is receiving heavyweight hype, reports CBS News' Carter Evans.

The verbal sparring began long before the first punch is thrown. For the last two months, Mayweather and McGregor have been on a trash-talking tour promoting the unusual match-up between a mixed martial arts champion and a man who many consider to be the best pound-for-pound boxer in history.

"It's the unknown factor that's part of the interest," Al Bernstein said. He is announcing the fight for Showtime, a division of CBS.

A group of 100 ringside doctors are now saying McGregor is so overmatched, that the fight shouldn't happen at all. Having never boxed professionally before, they believe he could be seriously injured.

"Conor McGregor is a complete unknown in a boxing ring. And Mayweather is 40 years old, off a two-year layoff," Bernstein said.

That one-two punch is helping create intense anticipation and big money. Pay-per-view sales will likely be the largest ever surpassing Mayweather's 2015 bout with Manny Pacquiao, which earned more than $400 million.

Mayweather, the overwhelming favorite, is eyeing a $200 to $300 million payday. McGregor could earn up to $100 million -- win or lose. But McGregor will have to stick to boxing rules, which means no kicking and no grappling.

Ticket sales have been lower than expected at a time when the struggling sport of boxing needs a knockout.

"There's more pressure on Mayweather and boxing than there is on McGregor and mixed martial arts because it's a boxing match and because Mayweather is the favorite," Bernstein said.