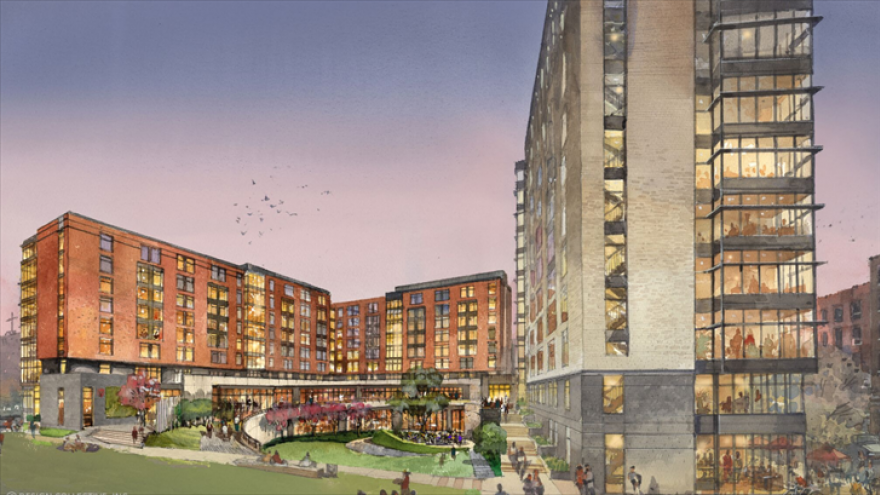 Marquette University’s new residence hall project will be expanded to accommodate 140 additional beds, President Michael R. Lovell announced on Thursday. A two-story addition to the facility’s west tower, which was approved by the Board of Trustees at its February meeting, will bring the total number of beds to 890 and the overall cost to $108 million.

The expansion will give the university the flexibility to close outdated O’Donnell Hall, a first-year residence hall that opened in 1950, said Lora Strigens, vice president for planning and strategy.

“We examined the occupancy rates of our existing housing stock and our enrollment projections over the next few years, and we determined that the most cost-effective and timely way for us to add needed beds, as identified in our master plan, was to add two floors to this project,” Strigens said. “We have no immediate plans to raze O’Donnell, so we still have the flexibility to reopen it should enrollment exceed capacity.”

Strigens added that the university’s master plan effort looked carefully at the condition of campus buildings and the cost of operating and maintaining each.

“As buildings like McCormick and O’Donnell continue to age, they require significant ongoing investment to maintain and bring up to current codes,” she said. “At some point the cost of that maintenance no longer makes sense when compared to replacement.”

According to Strigens, incoming funds will be used to expand and upgrade pipes that run under West Wells Street near the new residence hall and replace deteriorated fiber optic cables that run beneath McCormick Hall — a 50-year-old residence hall the university will eventually raze.

“To do these infrastructure updates in concert with the construction of the residence hall is far more cost efficient,” Strigens said. “Ultimately, it will save the university money by only excavating once.”

According to Strigens, the expansion will not alter the construction timeline for the new residence hall, which will open to students in August 2018.