NEXT:
See Also Kenosha school board meeting ends early as parents interrupt, chant to recall members
KENOSHA, Wis. (CBS 58) -- The Kenosha Unified School District rescheduled a meeting after it was initially disrupted by attendees who refused to go to overflow rooms on the meeting's original date of Aug. 24.

The board and dozens of people met at the district building Tuesday night for the scheduled meeting. Some of those in attendance refused to go to overflow rooms that district leaders say were part of social distancing measures in place, including for prior meetings. After multiple refusals to go to the overflow rooms, the board chose to adjourn the meeting and have it rescheduled for another day.

District leaders who spoke with CBS 58 said some of those in attendance were from outside the school district and unfamiliar with the meeting policies.

Todd Alan Price, one of the board members, said in an interview that they were prepared to listen to everyone who was scheduled to speak for however long it took, as long as protocols were followed.

"It was mainly frustration, I never felt concerns about safety," Price told CBS 58 about his reaction to what happened. "I think the group that was wanting to have the meeting under the conditions that they set up, didn't realize that we have policies, rules, protocols, it's just simply that. You simply have to abide by the rules."

Price said the board expected a large crowd, but they did not know it was going to be as large as it was.

He said the board decided to shift to teleconferencing for the rescheduled meeting and likely for future meetings in the fall.

"The reason that we're keen on having teleconferencing for this next meeting is because we have to be concerned about equity," Price said. "We have to make sure that everybody has a voice."

Area parent groups pushing for optional mask policies as opposed to mandatory mask use said they were disappointed in the board's actions.

"I felt it was rather shocking," Moms for Liberty of Kenosha County co-chair Amanda Nedweski said.

Nedweski wanted to speak at Tuesday night's meeting and said she tried to keep the crowd of people in attendance orderly. Nedweski said it is unlikely she will participate in the rescheduled meeting taking place virtually but hopes board members consider the viewpoints of parents in attendance Tuesday.

"It's my greatest hope that the board takes a good look at what happened last night and seriously listens to parents," Nedweski said. "It's not just about whether or not masks work, it's about parental choice."

Representatives from the Kenosha Education Association (KEA) were set to speak Tuesday as well, but via teleconference because of COVID-19 health concerns.

In a statement, the KEA said, in part, "if we want to continue with in-person learning without risking anyone's safety or having disruptions caused by quarantines, we need to follow public health recommendations. […] Masking is the very least we can do to ensure everyone's safety." 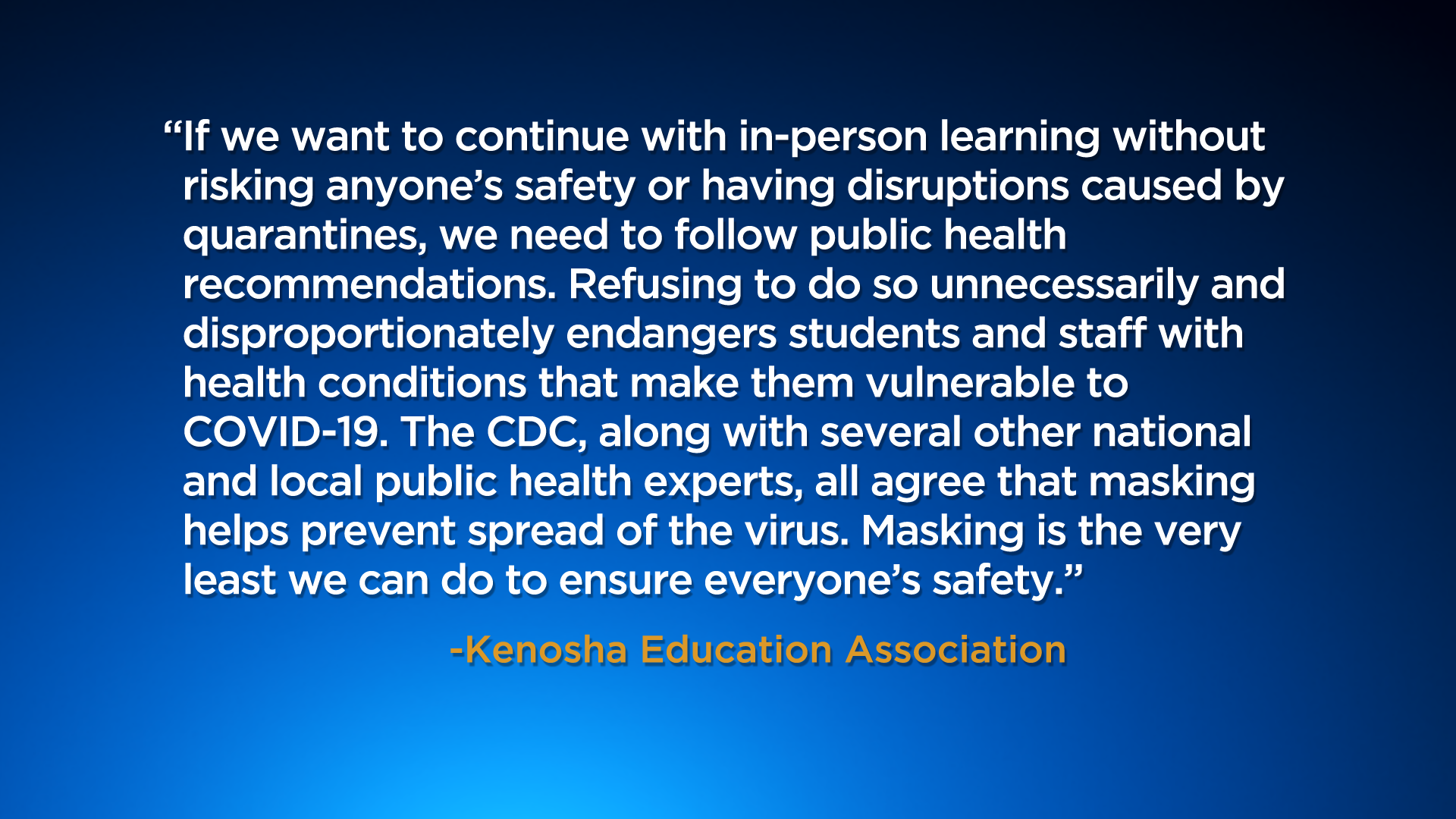 The Kenosha event highlighted the debate over the use of schools in masks occurring around the state.

On Wednesday, Aug. 25, nearly 500 doctors and pediatricians from around the state signed an open letter urging school districts to keep mitigation efforts like masking in place. Not doing so and leaving it up to parental choice is a health risk, they say.

"That puts everyone at risk, not just their own child," Dr. Greg DeMuri of pediatric infectious diseases at UW Health said. "They're putting their teachers, other children -- there's vulnerable children, children with medical issues that go to school that are real vulnerable to Covid."

DeMuri said with COVID-19 cases and hospitalizations on the rise around the state, including children, boosting vaccine rates and using mitigation efforts will help end the need for things like masks.

"This will end when people get the vaccine, when they mask up to stop transmission," DeMuri said. "It's not doctors and nurses that are determining when this is going to end, it's the virus."

The KUSD board meeting will take place virtually at 7 p.m. on Thursday, Aug. 26.