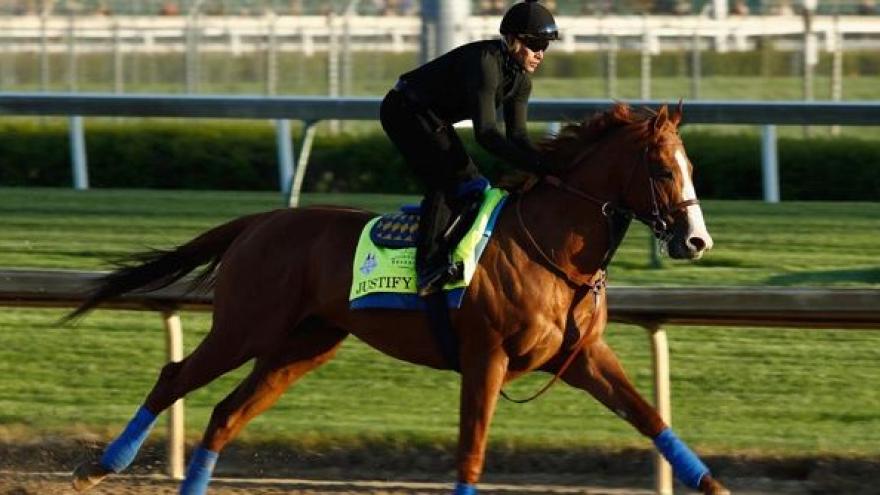 LOUISVILLE, Ky. (AP) — The Latest on Saturday's 144th running of the Kentucky Derby (all times local):

At least one record was broken at the 144th Run for the Roses — and not one anyone will be celebrating.

The National Weather Service declared it the wettest Derby on record, and the rain is still coming down. The weather service tweeted that the official rainfall measurement stood at 2.83 inches at 6:10 p.m., about a half-hour before the big race.

Rain was still pouring, and the weather service expects it to taper off slowly through the evening. A flash flood warning was issued for areas within a few blocks of Churchill Downs. Puddles of ankle-deep were scattered around Churchill Downs, and the downpours sent Derby goers cowering for cover all day long.

The Courier-Journal reported that the rainfall Saturday edged out the previous record of 2.31 inches, which held for nearly a century since May 11, 1918.

The weather service also said it was the wettest May 5 in Louisville history.

Justify is the social media and betting favorite to win the Kentucky Derby.

The unbeaten colt, which remained the 3-1 betting pick less than an hour before the 144th Derby despite the rain throughout the day and the track downgraded to sloppy, was the runaway choice on social media with 14,700 mentions, according to Talkwalker. The analytics firm measured data across social media platforms such as Twitter and Facebook and found that users' opinions differed from the oddsmakers.

A steady stream of people are heading for the exits at Churchill Downs, about two hours before the 144th running of the Kentucky Derby.

The rain has continued unabated, pouring harder as the day wore on. Swaths of the grandstand's uncovered seats that sell for hundreds each are empty, as Derby goers have opted instead to cram under awnings and overhangs to try to stay out of the rain.

Otis Miller joined the stream of those who had enough and decided to leave. He and his friend, William Smith, were visiting from Cincinnati for their first Derby in the infield, where there is little shelter. Both were sopping wet by the time they threw in the towel.

Miller gestured to his bright yellow suit, soaked under a flimsy poncho.

"I tried to bring the sun out on a rainy day with my yellow suit," he said, "but Mother Nature won that battle."

The mud is flying at rainy Churchill Downs, leaving jockeys' silks and faces coated in dirt and their horses covered in filth.

Riders in races before the 144th running of the Kentucky Derby are wearing multiple pairs of goggles during races, so they can pull a clean pair down whenever their current set gets dirty.

Jockey Brian Hernandez says the track surface is in good condition despite being listed as sloppy. He just won the $300,000 Pat Day Mile aboard 39-1 shot Funny Duck.

The National Weather Service earlier Saturday issued a flash flood warning for Louisville until 6:30 p.m., about 15 minutes before the Kentucky Derby is to be run.

A human traffic jam has formed in the underground tunnels leading to and from the infield, as drenched Derby goers seek shelter from the unrelenting rain.

Lacy Nelson glanced behind her as she tried to navigate the nearly impassible tunnel, and saw thousands more people pressing in behind her.

"Oh my god, we're like cattle," she exclaimed. "Look at everybody."

Nelson and her friend, Mary Rolfe, traveled from Minnesota to their first Derby, and said the rain is such a bummer they said they would have left if they hadn't spent $80 on their infield tickets. The daylong downpour has created ankle-deep puddles in the infield, where there is little shelter. Soggy spectators crowded under trees and awnings. Chairs sank into the mud.

"It's awful," said Rolfe. "I want to come back to the Derby when it's nice so I can really enjoy it."

Phones binged with an emergency flash flood warning and many crammed into the tunnels around them groaned.

Sarah Applewhite came from New Orleans with a group of friends, and said the rain hasn't ruined the day for them.

"It's like a music festival, with horses," she said. "I just hope it doesn't get ruined."

The National Weather Service has issued a flash flood warning for Louisville until 6:30 p.m., about 15 minutes before the Kentucky Derby is to be run.

Radar is showing torrential rain across the area, including Churchill Downs.

The weather service says up to 2 inches has already fallen and an additional 1 to 2 inches is possible.

It had been sunny and warm in Louisville this week leading up to Saturday with temps in the 80s.

Some wore hats with feathers that stretch two feet into the air. Some decorated theirs with birds and horns and horses. Despite the rain, the Kentucky Derby's famous hats were once again on display Saturday.

Erica Hetfeld, from Oregon, made her own that featured a beer bottle suspended in the air, pouring a stream of yellow flowers into a pint glass. It was designed in homage to a Bud Light commercial, the idea for which was conceived, she said, "after drinking too many Bud Lights while watching the Super Bowl." She estimated it weighs 10 pounds.

Lisa Vaughn donned a giant purple top hat dedicated to her favorite singer with Prince's iconic symbol glued to the front. Passers-by gave her a thumb's up, or sang Purple Rain.

Others wore flamingos and giant flowers or skirted Churchill Downs' ban on umbrellas by attaching them to their heads like hats. Some women wrapped their expensive creations in plastic bags to protect them from the weather.

Several years ago, Joe Conforto was pictured in an online blog that deemed his hat among the 10 worst at the races. The writer described Conforto's headwear as resembling a dead beaver. Conforto decided, he said, "it's time to step it up" and he's been working in the years since to redeem himself.

He arrived for his seventh Kentucky Derby on Saturday with a stuffed horse handmade by his wife on his head, with a matching feather bowtie.

The California couple squeezed into the crush of Derby goers crowding the end of the red carpet, engaging in the day's other favorite past-time: celebrity spotting. Hundreds around them craned their necks to try to glimpse someone famous.

"I'd rather meet a race horse," he said. "They're the greatest athletes in the world."

The track surface at Churchill Downs has been downgraded to sloppy about four hours before the Kentucky Derby is run.

Showers have been falling since mid-day in Louisville. The surface was listed as fast to begin the racing card and then went to muddy and is now sloppy.

Fans are seeking shelter under any overhang they can find, while donning plastic ponchos over their outfits and hats.

Celebrities are making their annual walk down the red carpet at the Kentucky Derby.

"Friday Night Lights" star Taylor Kitsch is attending his first Derby, but he's no stranger to picking a good horse. He says he won't settle on a choice until he sees the horses just before the race.

"I love to see them first, see what they're dealing with, see the energy of the horses right before they get in there, and then I'll know," said Kitsch, who has starred in HBO's "True Detective" and the films "Battleship" and "Lone Survivor."

Former Dallas Cowboys star Jason Witten turned ESPN football analyst on Monday Night Football made his way to Churchill Downs just days after announcing his retirement from football. Witten says he's "still on the high right now of going through so many emotions."

Figure skater Johnny Weir made his usual splash on the red carpet with his choice of head-wear. This year it was three crowns put together to symbolize the Triple Crown.

The dirt track at Churchill Downs has gone from being fast to listed as muddy.

The surface has been sealed or packed down, allowing water to run off and reduce the amount of precipitation being absorbed. Wet tracks are sealed to provide a safe and even racing surface.

Of the 20 Kentucky Derby runners in Saturday's race, 12 have never raced on a wet surface.

Bettors might want to consider Flameaway, currently a 50-1 shot that is 2-for-2 on wet tracks.

Firenze Fire has one win in two starts under such conditions. Free Drop Billy and Combatant have both finished second in their only starts on wet tracks.

Kentucky Derby day got off to a drizzly start for the second year in a row, with spitting rain and the forecast predicting downpours to last all day.

Women traded heels for galoshes and wore ponchos over their dresses. Some in the infield constructed elaborate tents out of tarps to try to stay dry and avoid the forming mud puddles. The weather for some was a disappointing twist after forecasters had for a week been promising perfect weather on Derby Day. It had been sunny and warm leading up to Saturday with temps in the 80s.

Amanda Phillips and Sarah Hoffman bought their mother infield tickets for Christmas, and the trio traveled from Orlando. They'd had their outfits meticulously planned for their first Derby, but eyed the sky Saturday morning, scrapped their dresses and made a last minute run to the store for ponchos and rain boots.

"We don't mind a little rain, we adapted," Phillips said, as they stood under an overhang at a wagering window to try to stay out of the rain. "Our hair looked great like two hours ago."

The 52-year-old trainer saddled Lookin At Lee to a 2 1/4-length win in the third race at Churchill Downs on Saturday.

Asmussen is second to the late Dale Baird in career wins among trainers. Baird notched 9,445 over 46 years.

A year ago, Lookin At Lee finished second in the Derby to Always Dreaming by 2 3/4 lengths.

Asmussen has a chance to win his first Derby later Saturday with 76-1 shot Combatant.

He could add to his total with 16 scheduled starters on the day, six at Churchill and 10 at Lone Star Park in Texas.

Bob Baffert is seeking a fifth victory in the Kentucky Derby and he's got the favorite, too.

Justify is the early 7-2 favorite for Saturday's 144th Run for the Roses that features a full field of 20 colts. Baffert trains Justify, who has just three starts, and longshot Solomini.

Justify, along with undefeated Magnum Moon, didn't race as 2-year-olds. They'll be trying to disprove an old jinx: No horse since Apollo in 1882 has won without racing as a juvenile.

History would be written if Ireland-based Mendelssohn pulls off a victory. No European colt has ever won the Derby.

The forecast calls for a chance of rain at various times Saturday. Post time is 6:46 p.m. ET.