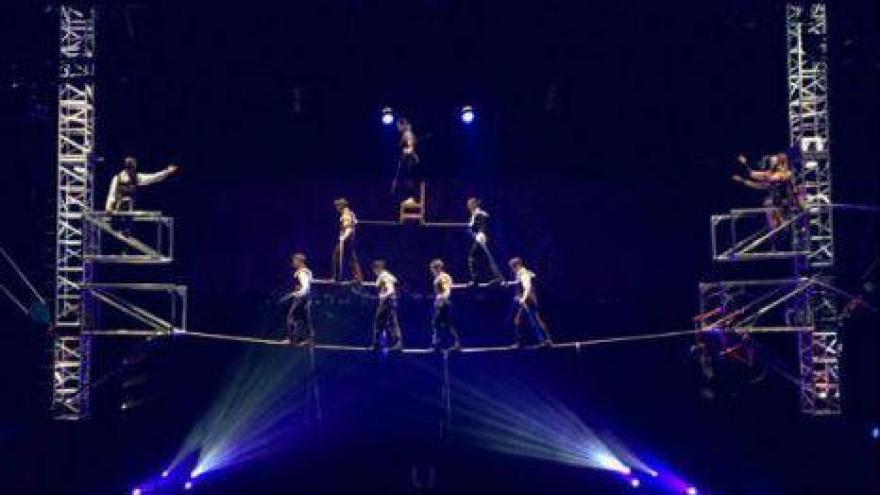 (CBSNews) SARASOTA, Fla. -- Five performers are injured after they fell from a high-wire act rehearsal at Circus Sarasota outside of University Town Center on Wednesday, reports CBS Affiliate WTSP. At least one of the performers is seriously injured.

The performers are part of the Circus Sarasota starring world-famous high-wire walker Nik Wallenda. Wallenda was on the high-wire at the time of the fall but did not fall.

In total, eight performers were on the wire practicing the final act, the pyramid, about 20 feet from the ground. It was part of Circus Sarasota’s record-breaking attempt to perform the eight-person stunt, circus founder and CEO Pedro Reis said during a media briefing.

Sarasota Fire-Rescue Spokesman Drew Winchester said the group fell 30 or more feet, and four of the injured suffered trauma. Three were brought to one hospital and the other two, to other hospitals.

“One of them currently is in operating room, two in the ICU,” he said Wednesday afternoon.

One is in guarded condition.

Reis, founder and CEO of the Sarasota Circus Arts Conservatory which puts on the show, said during a news conference that nothing was wrong with the rigging but that some performers lost their balance. He said the circus will open as planned.

The Sarasota circus was scheduled to open this weekend. In an interview posted Wednesday morning by the Herald-Tribune, Wallenda said he was looking forward to the upcoming three-week run at Sarasota.”

“We’re still in the process of putting this act together, but the idea is it’s something all new that they haven’t seen in Sarasota,” Wallenda told the newspaper. “I’m trying to bring back things my great grandfather used to do, those sort of tricks. Some of them haven’t been duplicated since.”

Authorities are investigating and said Wallenda may make a statement later Wednesday.

The Wallendas are considered the pre-eminent family of tightrope walkers.

This is not the first tragedy strike the family. Patriarch Karl Wallenda died in a fall during a stunt in 1978 in Puerto Rico. Two other family members also died decades ago while performing.

Nik Wallenda said he trains like an athlete and calculates his risks for every stunt.

“I respect deeply what I do and realize there’s a lot of danger in it,” he told The Associated Press during a 2013 interview in Sarasota, his Florida hometown.

In 2013, Wallenda successfully crossed a tightrope stretched across the Little Colorado River Gorge near the Grand Canyon. That walk was televised by the Discovery Channel. There was no safety net and Wallenda didn’t use a tether.

In 2012, Wallenda was the first person to cross a tightrope over the brink of Niagara Falls. Other daredevils have crossed the water farther downstream but no one had walked a wire over the river since 1896. He did use a safety tether for that walk.

The Wallendas trace their roots to 1780 in Austria-Hungary, when their ancestors traveled as a band of acrobats, aerialists, jugglers, animal trainers and a bit later, trapeze artists.