Down Used in Comforters and Pillows Involves Live-Plucking 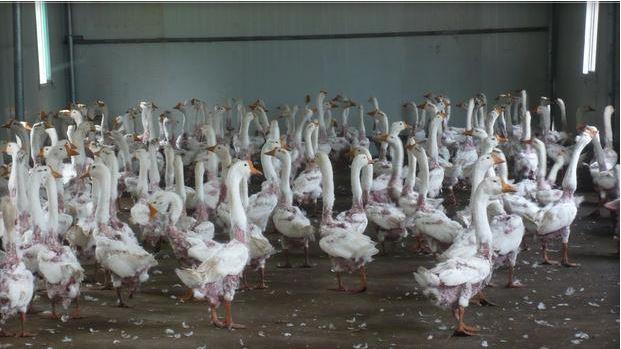 (CBSNews) A good night's sleep can come with a hidden cost that consumers are likely unaware of.

The highest grade of down, used to make the most comfy and costly bedding, involves a practice called live-plucking. That's when feathers and the undercoating of geese and ducks are pulled off their skin while the waterfowl are still alive.

Most retailers and their suppliers follow voluntary standards meant to ensure that live-plucking isn't part of their supply chain. But People for the Ethical Treatment of Animals (PETA) has released disturbing video taken by undercover PETA workers who visited nearly a dozen farms over a month-long period last fall in China, which produces roughly 80 percent of the world's down.

"It's horrific to see and hard to describe," said the PETA worker who shot much of the video and spoke to CBS MoneyWatch on condition of anonymity due to the nature of her work.

The PETA employee said the activist group traveled to China hoping to learn that live-plucking was being phased out, but instead it found the practice is "still something openly done."

"Eye witnesses found live geese are being plucked on farms linked to responsible down suppliers. These down products are exported throughout the world and sold to consumers who don't understand the complexity of the supply chain," said Anne Kellogg, PETA's manager of corporate affairs. "This investigation shows there is no way to tell whether down is live-plucked just by looking at it."

Some readers might prefer not to watch the graphic video, which shows geese, their feet restrained or held down by their necks, with farm workers pulling their feathers and undercoating off their skin, leaving open and often bloody wounds in the process.

"We visited 11 farms, and many we went back to multiple times to make sure it wasn't a one-time thing," said the PETA worker. "One producer we spent eight hours with, and it was not difficult to get live-plucking discussed, and to see and learn about it. Their attitude in general is animals are insignificant."

PETA said its investigation offers evidence that retailers including Lands' End, Eddie Bauer and Hollander Home Fashions inadvertently had live-plucked down in their supply chains, despite a certification process involved in the Responsible Down Standard (RDS) that mandates the feathers are "non live-plucked."

Lands' End declined to address PETA's specific concerns, while Eddie Bauer and Hollander both expressed concern about PETA's findings and said they were taking additional steps to address the issue.

"Lands' End works with vetted suppliers who have certified, responsibly sourced down," the retailer said in an emailed response. "The down we use is also a byproduct of the food industry, making it more environmentally friendly."

Eddie Bauer had conducted its own probe, a spokeswoman for the retailer said. The company also released a letter from CEO Michael Egeck, in which he expressed confidence that Eddie Bauer has not had live-plucked down in its supply chain for many years and that he has confidence in the RDS process.

Mark Eichhorn, CEO of Hollander Home Fashions, said a recent audit of its down suppliers and their sources found no evidence of live-plucked material in its chain. Still, due to PETA's concerns, the company has commissioned another independent audit, using a different firm.

"We will not tolerate this practice and will do what we can to ensure it is not being utilized by any supplier of ours," Eichhorn wrote in an emailed response.

The vast majority of the pillows, comforters and mattress pads sold by Hollander are made with synthetic fibers, Eichhorn added.

PETA said it recorded phone conversations in February, March and April that illustrated links between the farms in its exposé and intermediaries that supply down to Hollander Sleep Products, Down Decor and a third company that previously sold to Allied Feather & Down, or AFD.

"The companies have a responsibility to know what is in their supply chain," said Ben Williamson, a PETA spokesperson. At the very least, they are "indirectly supporting the cruelty of live-plucking," he asserted.

Hollander, Down Decor and AFD dismissed PETA's claims as either incorrect or linked to farms that are no longer part of their supply chain or had been rejected before becoming a partner.

"We applaud PETA's work. It was audacious and addresses a practice that we -- and every brand in the USA that we work with -- abhor," said a spokesperson for Down Decor.

The animal rights group should be praised for "raising awareness of what is a terrible practice," said AFD President Daniel Uretsky. "No one is claiming these practices don't exist."

But he rejected the PETA's contention that because live-plucking "is happening here, it must be happening everywhere."

Uretsky believes the industry and the standards meant to rid supply chains of live-plucked down have lessened the problem, especially when compared to the state of affairs only a few years ago.

Down, the undercoating of waterfowl including geese, ducks and swans, is the light, fluffy filaments that grow from a central quill point, making a structure that captures air and gives it insulating ability.

Live-plucked geese are typically kept alive longer so they can be plucked several times, which allows their down clusters to get larger and thus have a higher fill power, meaning better insulation and less weight.

Live-plucked down is "higher value and very, very fine, with an 800-to-900 fill power. It's very high end, and sought after for bedding, and some [manufacturers] specifically ask for live pluck," said Anne Gillespie, director of industry integrity at Textile Exchange, a nonprofit group focused on industry sustainability issues.

Live-plucked down is less ideal for use in outdoor wear because it compresses too much, said Gillespie, who noted that down obtained from already slaughtered geese works well as insulation in jackets, which is among the reasons why the outdoor industry is ahead of household goods suppliers in adopting humane standards. "Hopefully, the message is drifting over into the bedding industry," she said.

"Most of the outdoor brands are using RDS," Gillespie said. "We have less of an impact at the home and bedding level."

While PETA views the lack of transparency in a supply chain that has multiple components to be a means of offering cover to farms and other entities willing to hide objectionable practices, Gillespie believes the problem often involves less nefarious factors.

"They [PETA] want to know the names of everybody in everybody's supply chains. The industry is starting to move that way, but remains very cautious," she said, noting that trade and competitive issues stop people from naming suppliers because companies worry their customers might bypass them and go straight to their source. "I used to be a buyer in the outdoor industry, and that definitely happens. It's a very price-competitive industry."

And while live-plucking is a practice that PETA would like to eliminate, it also opposes using geese or other animals for any purpose related to food and products that people make.

"PETA appreciates that companies attempt to reduce harms to animals, but there's no way to eliminate suffering when animals are used as a commodity," said PETA's Kellogg. She added that the group would prefer businesses instead offer clothing and bedding that use synthetic alternatives to down.

Uretsky points out that such synthetics are petroleum-based and therefore present environmental issues. He also said the reason most of the world's down is produced in China is because Chinese have a preference for eating geese and ducks, and if the animals are to be slaughtered, then it would make sense to use their feathers afterward.

"Down, when sourced properly, is the byproduct of the food industry," he said. "I've never seen any synthetic able to replicate the properties of down," said Uretsky. "There are nice synthetic versions, but on a warmth-to-weight basis for insulation, there is nothing else that provides that same level."

In response to the report by PETA, the American Down & Feather Council responded with the following statement:

"ADFC and its members neither support nor condone the illegal harvesting of feathers and down from live birds. I would like to emphasize that down and feathers are a natural byproduct of the food industry, and that live plucking is neither a pervasive or accepted practice. Our members are committed to the humane treatment of animals, submitting signed statements certifying that the down and feathers in their products are gathered in accordance with animal welfare laws. I can assure you that we do not utilize feathers from animals that have been harvested while alive. In fact, a research paper commissioned by the IDFB is to be released imminently, which refutes many claims made within your article. The white paper, titled, “The Sustainable and Humane Practices of the Down and Feather Industry: A Global Assessment of Industry Statistics and Practices,” provides factual information about the down and feather supply chain, supporting the claim that down and feather is a byproduct of the enormous global food industry."