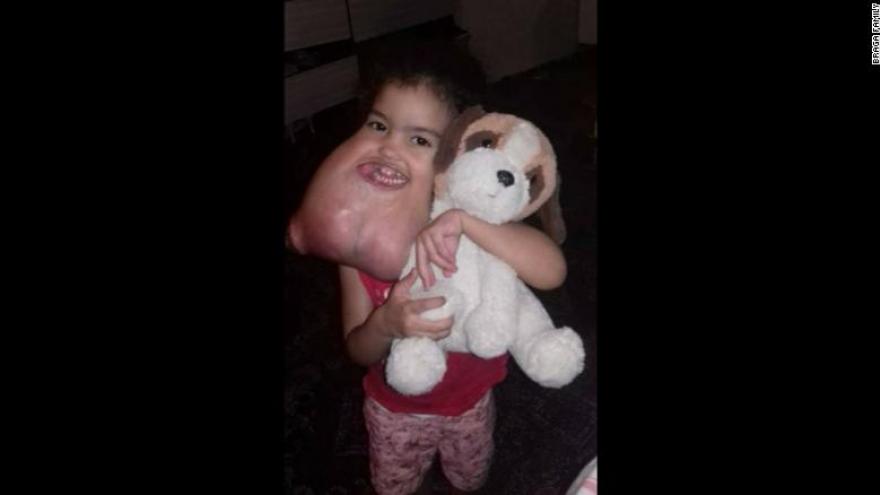 (CNN) Doctors in Louisiana removed a rare facial tumor from a Brazilian 3-year-old after her parents took to social media pleading for help.

Melyssa Delgado Braga of Sao Paulo is now recovering from the eight-hour surgery, conducted in December.

Little Melyssa's journey to the United States began when Dr. Celso Palmieri Jr., assistant professor of oral and maxillofacial surgery at the Louisiana State University Health Sciences Center, read a post on a Brazilian news site while reviewing publications from his home country. The child's family was seeking help to get their daughter to the United States for treatment.

"As I was reading more about her story, I realized our department could probably help her, and particularly Dr. Ghali and his department. I've seen him helping people so many times, so I took a screenshot of the child, and I texted it to him," Palmieri said of his colleague, Dr. G.E. Ghali.

After an hour searching social media, he was able to get in contact with the parents, who speak only Portuguese.

Ghali, chairman of LSU Health, said he believed he could help Melyssa. But before reaching out to the family, he wanted to ensure a safe and affordable stay in the United States.

He turned to Shreveport's Willis-Knighton Health System, a nonprofit health care organization with a history of hosting international patients and rare surgeries. Officials there agreed to provide the family with housing and underwrite the cost of the hospital stay.

A month later, Melyssa arrived in the United States for surgery. Ghali diagnosed her with a myxoma, a very rare and aggressive tumor.

"This is typically a benign tumor, non-cancerous, but it's very locally aggressive," he explained. "This tumor has pretty much eaten away her entire jaw from one side to the other and has displaced her tongue. (She's) really unable to eat pretty well. She was on her way to be a pretty malnourished child."

Lisa Babin, LSU Health's director of public affairs, said the cause of myoxma is unknown.

"Myxomas are more common in females than in males. Approximately 10% of myxomas are thought to be genetic (passed down through families). These are called familial myxomas and are more likely to be numerous and occur in younger patients," she explained.

Without the surgery, Babin said, Melyssa would have needed a feeding tube and was about a month away from her breathing being blocked. "Patients generally die a slow, progressive death from the combination of malnourishment and blocked airways."

Ghali, who along with the other surgeons donated his services, said at a recent news conference that that the girl's breathing was bad and that the tumor was pushing her tongue to the back of her throat.

"The girl's mother asked if I would be able to reconstruct the tongue, because over the past few years, her tongue had been obliterated by the tumor," he said.

"When we were able to remove this tumor, the tumor weighed over 5 pounds on a child that probably doesn't weigh more than 25 pounds herself, total weight," Ghali said.

"I am grateful for everything the doctors here have been able to do for my daughter and in only a short month," the girl's father said.