Crocodile eats dog that tormented it for years 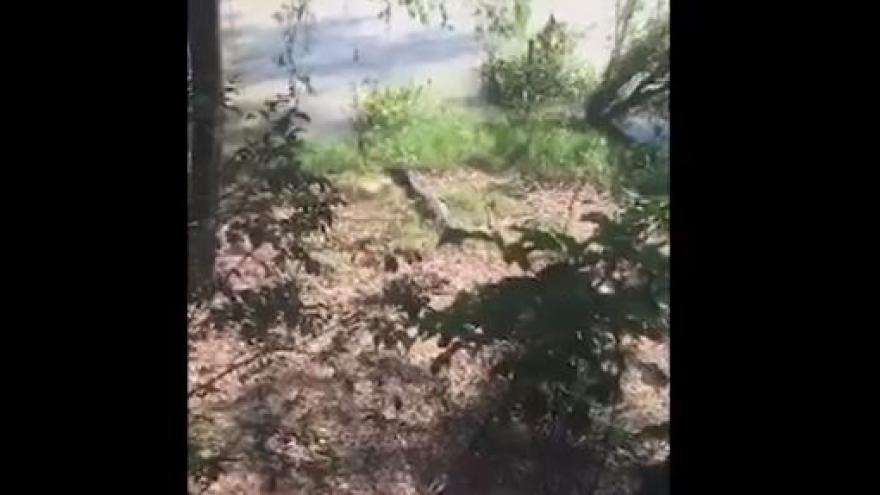 (CBS News) -- A small dog that spent a decade tormenting a crocodile on her owner's property in Australia has been eaten by the animal she taunted for so long. Owner Kai Hansen, who often had guests and even television crews at his house south of Darwin to watch Pippa the terrier chase the crocodile into the water, watched in horror as she tested the reptile's patience too far and was dragged into the water.

Video posted on Facebook by Australia's ABC network shows the final encounter, and Hansen -- who admitted after the incident that it was "something that had a high probability of happening sometime" -- can be heard screaming in horror along with other onlookers. Pippa runs toward the crocodile, as she had done countless times before, but this time as she gets close to the animal's head it lunges and quickly disappears into the Adelaide River with Pippa in its jaws.

Hansen told ABC that he didn't blame the crocodile, saying it was only "doing what crocs do."

The network first featured Hansen and his crocodile-scaring terrier in 2017, airing video of Pippa running down from the house to the river's bank, at her owner's encouragement, and barking at the crocodile. The croc always used to flee into the water.

ABC says Hansen moved to his home at Goat Island Lodge, which sits in the middle of the crocodile-infested Adelaide River, 15 years ago to escape city life.

Speaking to ABC's breakfast show on Thursday, Hansen said he was "really sad," about losing his pet and that he hadn't yet watched the video of Pippa's final encounter with the croc.

"She's not doing something wrong," he said, "she's just doing what crocs do… In the early days she actually had a go at me a couple of times. These days I just throw food out from up the top and no-one is allowed to walk down there."

He told the network he would get a new dog, but "definitely" would not let it chase crocodiles.

Hansen, criticized by some on social media for allowing, even encouraging the dog's behavior, said it was simply Pippa's nature to chase larger animals.