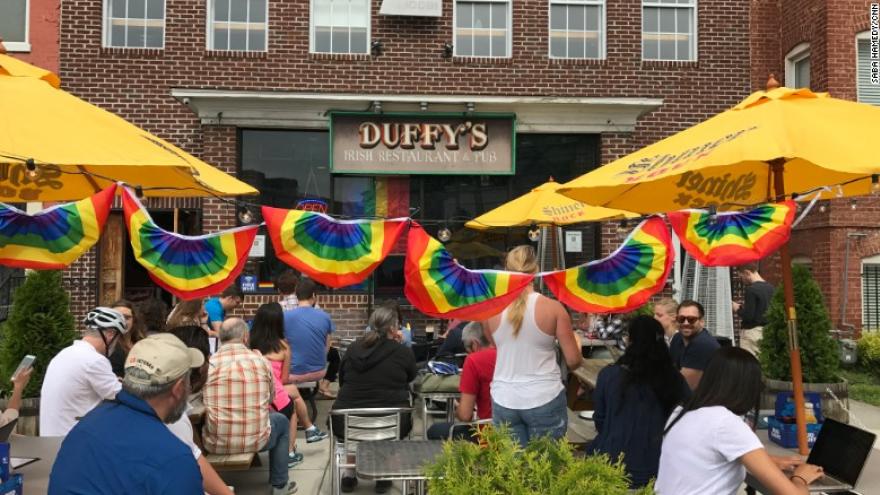 (CNN) Jimmy Zuma regretted not getting to Shaw's Tavern earlier.

There was already a line to get into the DC bar at 9:40 a.m. Thursday, and Zuma, a retired journalist, was among many Washingtonians flocking to local taverns to watch ousted FBI Director James Comey's Senate testimony.

"This should have been a national holiday," Zuma mused.

Lines had formed outside the establishment as early as 8:15 AM, with many -- including journalists -- trying to cut the line to get inside in time to hear the testimony.

One man approached the bouncer at 9:55 a.m. and asked about his chances to enter if he was in the back of the line.

Some have likened the Comey hearing to OJ Simpson's trial in October of 1995, when more than 150 million viewers (about 57% of the country) watched the verdict live. One Forbes headline read: "Will James Comey Testimony Be 2017's White Bronco?"

A handful of bars inside the Beltway -- ranging from Union Pub on Capitol Hill to the Partisan in Penn Quarter -- hosted special viewing parties, which they promoted on social media throughout the week.

"Come on...you know you want to watch the drama unfold this Thursday," read the description of Shaw's Tavern's Facebook Event "The Comey Hearing Covfefe." "Grab your friends, grab a drink and let's COVFEFE!"

The bar, which opened its doors an hour early on Thursday, offered a special "FBI" sandwich (a take on the BLT), an "FBI Breakfast" and Stoli Vodka, which is Russian.

Rob Heim, general manager at Shaw's Tavern, said he thought of the idea of a viewing party while visiting his mom in Florida.

"A commercial came on CNN about the upcoming Comey hearing and my mom said, 'Who would watch that?' Heim told CNN. "And I said, actually a lot of people in DC would."

He quickly put together a Facebook invite, and by Wednesday evening, almost 600 people had RSVP'd to say they are going.

"I was very surprised," he said of the event's popularity. "Someone called the bar and said they were coming from North Carolina to watch. I thought it was going to be a bust."

Some bars geared up for the Comey testimony with special cocktails: The Partisan created "The Last Word," Duffy's Irish Pub created "The Covfefe Cocktail."

Union Pub promised a round of drinks for the house every time President Donald Trump tweets about Comey.

DC bars weren't the only ones opening their doors. Some bars in Los Angeles, San Francisco, New York and Texas are also hosting viewing parties during the hearing, which is being broadcast on major news and television networks.

Many in DC said holding events for political events is a standard practice given that it's an industry town.

"It's just what the community wants to watch," Molly Hippolitus, communications director for Neighborhood Restaurant Group, which owns The Partisan, told CNN. "Whether you're in government or not, you are just so keenly aware of these events or interested in them that holding a Comey testimony viewing party just felt like a fun thing to do. It's so distinctly Washingtonian."

Casey Callister, owner of Duffy's Irish Pub, said the excitement around political events in DC -- including presidential debates and Inauguration -- are similar to that of sporting events.

"In DC, these political events impact the liveliness of us all," he told CNN. "So you can get attached to them, just like a sports fan can ... for us, these events are totally normal. This is just an everyday thing to be honest. This one just happens to be very popular with the media."

At Duffy's, 11 TVs played the testimony, with one set up on the patio so even passersby could watch. The bar was mostly quiet at the start of the testimony, with eyes glued to the screens. Some bar attendees shushed others when the room got too loud. Others couldn't help but yell during parts of Comey's hearing: there was ooh-ing, gasping and even laughter.

"History is being made right now," attendee Dana Browne, who came with her 5-month-old baby, Beau, told CNN. "I was telling my husband, 'Is there anything more DC than a watch party for a Senate hearing?'"

The 27-year-old Washington resident said she brought her son so that he can learn at an early age he can "be part of a movement."

"I'm going to tell him, 'You were there when James Comey came forward and spoke against the President.'"