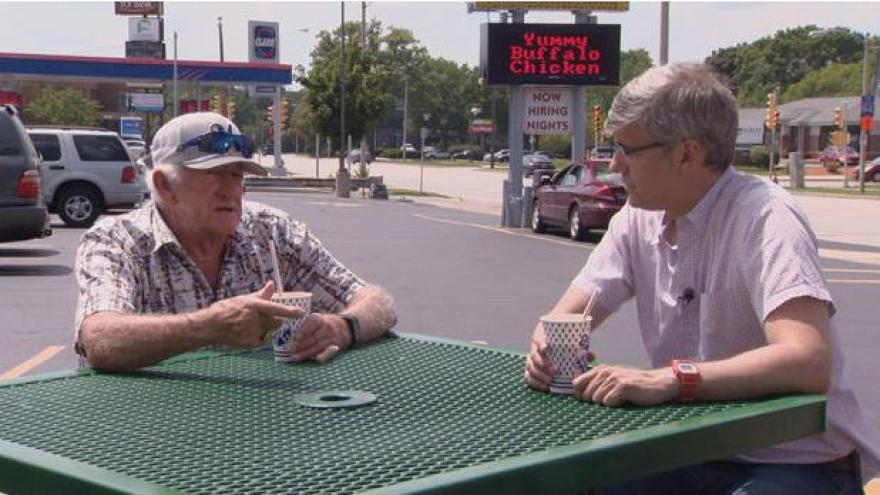 (CBSNews) Tom Linscott, the owner of Gilles Frozen Custard, welcomes everyone to his establishment.

"A summer day in Milwaukee, where else would we be?" said one patron.

Just don't confuse his product with that other frozen desert.

Rocca asked, "What is the worst thing I could call this?"

"Well, you know, if you call it 'ice cream,' you're not gonna do real well," he laughed.

Linscott is not being a stickler; frozen custard is not ice cream. The biggest difference: Custard uses eggs (yolks included), making for a sinfully creamy experience.

It's especially popular in Milwaukee -- no one is quite sure why -- but the city has the highest concentration of frozen custard shops in the world!

Gilles is the oldest, serving since 1938. Custard's first stand, if you will.

Former commissioner of Major League Baseball Bud Selig is a regular here -- and this favorite son is careful not to play favorites. "I love frozen custard and I love ice cream, so I love 'em both," Selig said.

Wow! That's like loving the Red Sox and the Yankees. "Well, I know," he replied.

And how's this for a double play? Ordering two chocolate shakes is legendary baseball announcer, funnyman and former player Bob Uecker, who is also a custard fan. "I got custard, free custard, every time I got a hit," he said. "So that was about once a month."

Uecker has a theory on how his hometown became Custard Central: "You don't get custard on the coast like you get in the Midwest. You can't! Because the cows in California are too hot. Cows in the Midwest in the winter shake and shiver. That's what gives the custard the air. Your first scoop, you like it."

"At about 30 seconds in, I was still believing you," Rocca said.

Actually, frozen custard as we know it was invented in Coney Island, New York, in 1919. It migrated west with the Chicago World's Fair in 1933, and put down roots.

Gary Cartwright, who will be 68 in September, has been eating frozen custard almost his entire life. "I'm pretty sure I had my first frozen custard at about two years old," he told Rocca.

"It kind of reached Milwaukee and Wisconsin in the early- to mid-1930s," he said. "There's more of it here than anywhere else. It appeals to everyone, young, old.  So, I feel good about serving this good a product."

And the onslaught of snacks was having an effect on Rocca: "Excuse me … I've just eaten so much custard today," he said.

We may never be able to explain why Milwaukee makes such great custard, but to taste is to believe.

As Tom Linscott said, "When God wants the good stuff, he asks for custard."