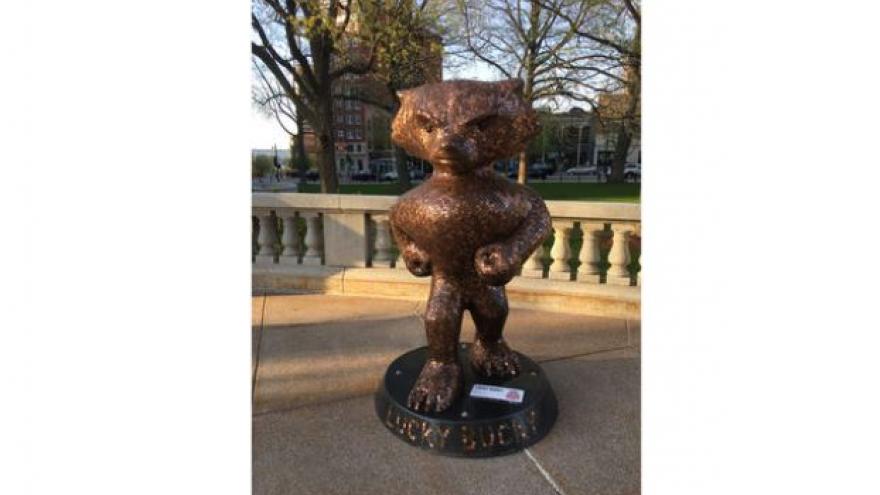 GREEN BAY, Wis. (AP) — An artist who attended the University of Wisconsin will show off her version of the school's beloved mascot as part of a free public art display in Madison.

Emily J. Wirkus is among more than 60 artists who put their own creative twist on 6-foot fiberglass statues of Bucky the Badger. The 85 statues were unveiled this week throughout Madison for Bucky on Parade, the Green Bay Press-Gazette reported.

"That first penny I glued on I knew I had to finish it no matter what," she said. "I think it helped that it was such a tight turnaround, because there was no wiggle room to kind of put it off and procrastinate."

She calls her piece of art "Lucky Bucky" because almost all the pennies are heads up but for a couple of intentional exceptions.

"That's why he's called Lucky Bucky, because if you find a penny on the ground and it's heads up, it's supposed to be lucky," she said.

Wirkus said she was initially inspired to use the pennies because of Abraham Lincoln, the man on the coin. Lincoln signed the Morrill Act into law in 1862, giving states blocks of land that could be sold to fund universities that teach agriculture and mechanical arts. The law allowed the University of Wisconsin to expand and become the school it is today, she said.

Wirkus hopes Lucky Bucky's post outside the Capitol will be a secure location.

"Every time I have to go to Madison I'll probably check on him," she said. "Make sure he's OK."

The life-size Bucky statues will be in Madison and Dane County until Sept. 12.