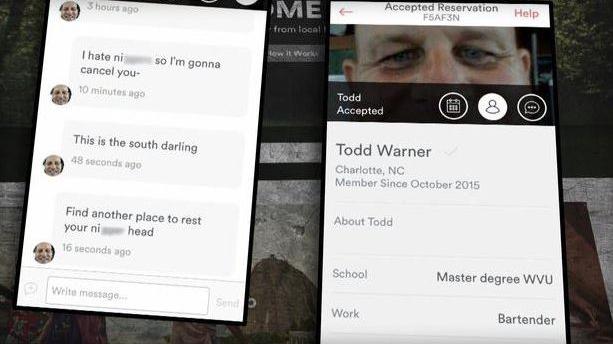 (CBSNews) Airbnb is investigating claims of racism by some of its users. The latest incident involves a Northwestern University student identified only as "Jane" who needed a temporary place to stay in Charlotte, reports CBS News correspondent Vladimir Duthiers. She received messages, apparently from the North Carolina Airbnb host, that were so offensive, the on-demand home rental giant decided to ban him for life.

Proclaiming "This is the south darling [sic]," a user identifying himself as Todd Warner allegedly wrote: "find another place to rest your n***** head."

The messages were published on a blog by one of Jane's friends. Warner repeatedly cursed and used racist language despite Jane telling him to stop.

"I was absolutely appalled. It was just outrageous," Airbnb global head of policy Chris Lehane said.

Airbnb tells the more than 80 million people who have used its service they "belong anywhere."

"It's why we took immediate action and why we have a zero tolerance policy on any type of activity like this," Lehane said.

"It makes me feel terrible. But I think it's part of the microaggressions and just being a black American," said Chicago resident Quirtina Crittenden, who said she's experienced racial bias on Airbnb. She started the hashtag #airbnbwhileblack.

"It took me about seven to eight times when I was using Airbnb, and each time I would get like a random excuse from the host, like, 'Oh, it's booked.' 'I decided to stay in my place this week,'" Crittenden said.

"You got suspicious. Then what'd you do?" Duthiers asked.

"That's when I changed my profile. I changed my photo ... to a cityscape in Chicago. Then, I shortened my name from Quirtina to just Tina. And then after that, I never had any issues," Crittenden said.

A Harvard Business School study confirmed what Crittenden suspected. Airbnb guests with distinctively African-American names were about 16 percent less likely to be accepted than those with white names.

"The extent of discrimination is pretty persistent. So it holds whether there's an African American host, or a white host," Harvard Business School assistant professor Michael Luca said.

Airbnb's opponents and competitors have even seized on the issue, releasing a commercial last month.

"I am a black woman. I get declined all the time on Airbnb," a woman said on the commercial.

The company says it has begun offering training to employees and hosts. Laura Murphy, a former top ACLU official, will conduct a comprehensive review to make sure guests and hosts are being treated fairly.

"A really, really big challenge that everyone in society is dealing with, but we want to do our part," Lehane said.

"Do you still want to use Airbnb or has it turned you off?" Duthiers asked Crittenden.

"I have no problem with Airbnb as a company, as a service. But I do think they need to put a little action behind their words," she said.

Airbnb hopes to complete the review by September.

CBS News reached out to "Jane," the user in North Carolina, but did not get a response. We also tried to contact the host, Todd Warner, but were unsuccessful.