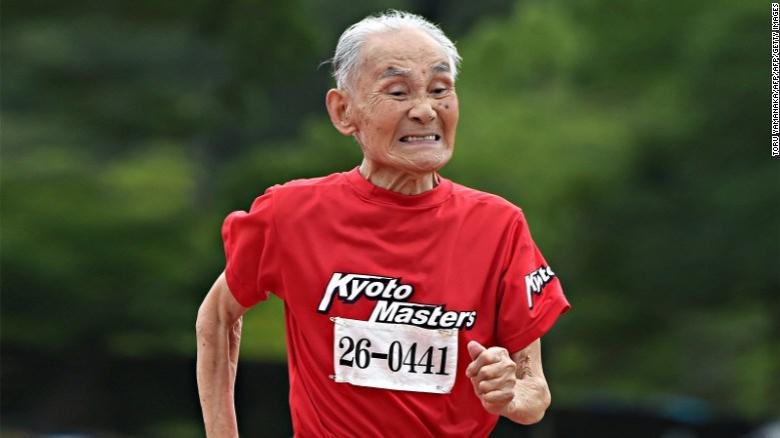 (CNN) A Japanese man has set a new Guinness world record in track and field -- at the ripe old age of 105.

Hidekichi Miyazaki, a father of four and grandfather of 10, completed the 100-meter sprint in 42.22 seconds on Wednesday, entering the record books as the world's oldest competitive sprinter.

"I slept very well last night," he told CNN Thursday. "I was really moved that something like this can happen."

Miyazaki's daughter Kiyono added her father had not been sleeping well leading up to this year's Kyoto Masters competition, experiencing pain in his legs.

In addition to sprinting, Miyazaki also competed in the shot put event at the Kyoto Masters, marking 3.25 meters.

Miyazaki didn't take up track and field until the age of 93 -- more than three decades after he retired from working in an agricultural cooperative, Kiyono told CNN.

He spent the previous 33 years practicing calligraphy and playing Japanese chess with his friends. But as they started to die from old age, he wanted to find something he could do on his own, Kiyono explained.

That was track and field.

Miyazaki first completed the 100-meter dash at the Kyodo Masters in 2004, when he was 96 years old. It was then that he started imitating the trademark pose of Usain Bolt, the world's fastest man.

He does it because "it's cool," he said.

Even at his age, Miyazaki takes training very seriously. He practices every day, except when it's raining, in a nearby park, his daughter said. He does a 100-meter sprint and practices throwing shot put three times.

Miyazaki runs because it's good for his health, he said, "and for a gold medal."

Kiyono said the doctor has told her father that it's too much for someone his age, but he refuses to listen.

"He is an amazing individual," said Kenji Iwanami, Secretary-General of the Kyoto Masters competition. "His mind is clear and he manages his condition perfectly."

As for the time he clocked in Wednesday's sprint, Miyazaki says his goal now is to do better.