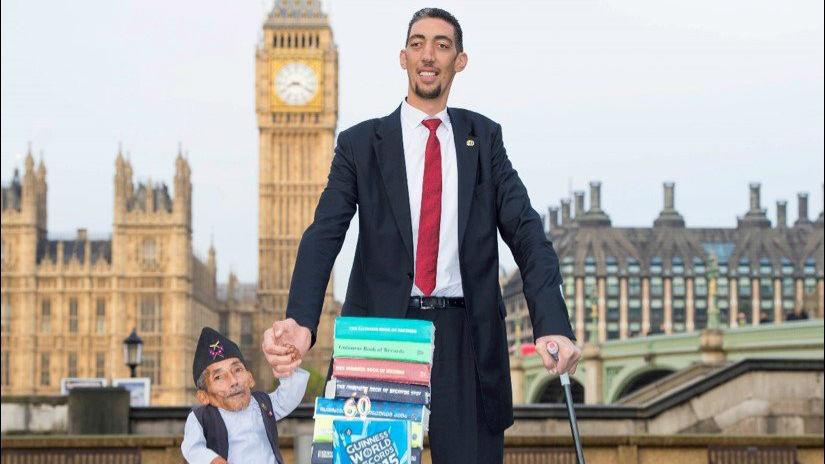 One stands as tall as a red British phone booth. The other is the height of six stacked cans of baked beans.

On Thursday, for the first time, the man with the tallest recorded height in the world and the shortest man in the world met at an event in London, where they posed for photos and stretched for an awkward handshake.

The occasion was the 10th annual Guinness World Records Day, which celebrates record-setting achievements around the globe. The Guinness folks flew the two men, Sultan Kosen of Turkey and Chandra Bahadur Dangi of Nepal, to London for the unique photo op.

Kosen, 31, is a part-time farmer who measures 8 feet, 3 inches tall and can reach a basketball hoop without jumping. He became the world's tallest living man in 2009, overtaking China's Xi Shun, who stood a mere 7 feet 9 inches.

Dangi, 74, is just 21½ inches tall and is the shortest adult human ever verified by Guinness World Records. A weaver who also helps look after buffaloes and cows in his remote mountain village of Reemkholi, he weighs just 32 pounds.

\"To be able to finally meet Chandra after all this time is amazing,\" Kosen said at the event. \"Even though he is short and I am tall, we have had similar struggles throughout our lives, and when I look into Chandra's eyes, I can see he's a good man.\"

Kosen also holds the record for largest hands on a living person. His measure 11.2 inches from the wrist to the tip of his middle finger.

Thousands of people took part in Guinness World Records events around the world Thursday, with records tumbling in Australia, France, Dubai, China, Germany, Japan, the UK and the United States. In Shanghai, 388 people went for a record for the largest communal breakfast in bed.