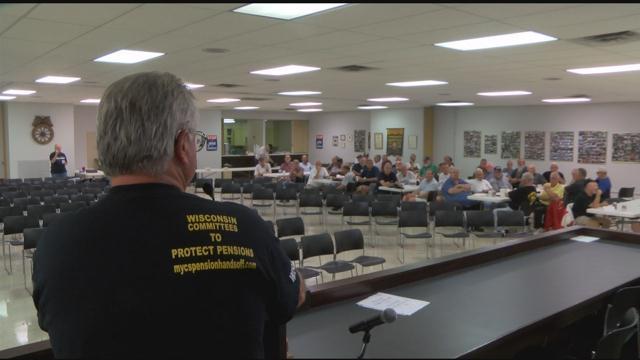 Under a new law, millions of union workers and retirees across the country are at risk of not getting their pensions as promised. Many in Wisconsin are concerned and are headed to Washington D.C this week to speak up.

The concerns began in December, after congress passed the Multiemployer pension reform act.

\"The government passed a law in 2014, which is going to allow any multiemployer pension fund to reduce pensions 30 to 60%, if the trustees are in declining condition with no proof,\" said Bob Amsden, who is a member of the Local Teamster 200. He's also one of 10 million retirees across the country who could face pension cuts.

\"I drove trucks for 33 years for 5 companies... every job we had we knew our pensions were promised and guaranteed by the government, \" Amsden said.

But now that promise is in limbo because of the new law. That's why Amsden started the \"Wisconsin Committee to Protect Pensions\" in January 2015.

\"This isn't going to be just a teamster issue... this is going to affect 1,400 multiemployer plans which are carpenters... electricians.. plumbers,\" Amsden added.

The Wisconsin committee will travel to Washington D.C this week with 20 of it's members to speak up about their concerns.

\"Going out there to testify in front of the Treasury Department to tell them how devastating this is going to be to us if they don't do something to stop this,\" Amsden said.

In June, Senator Tammy Baldwin signed on as an original cosponsor of a bill called \"The Keep our Pension Promises At.\" The bill was introduced by Senator Bernie Sanders and it could reverse the pension cuts.

The Wisconsin committee is scheduled to meet with Senator Baldwin, Republican Senator Ron Johnson and other legislators on Thursday about the proposed bill.

It's unclear when the pensions could be cut, but if congress doesn't act, it could happen as early as 2016.