Wisconsin organist to play for Pope Francis in NYC 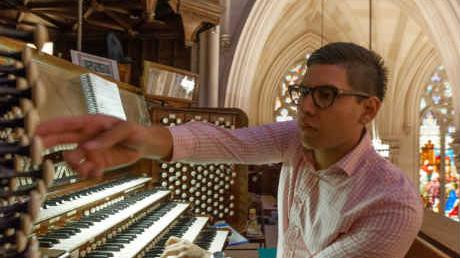 An organist with Wisconsin ties has the honor of playing for the Pope during his visit in the U.S.

25-year-old Michael Hey is from Waukesha, Wisconsin. He began his career as an organist in Milwaukee, but he's now in New York, working as Assistant Director of Music at Saint Patrick's Cathedral in Manhattan.

Hey will be playing the organ for the Papal Mass at Madison Square Garden on Thursday, as well as another service at St. Patrick's Cathedral in New York on Friday.

He has performed as an organist throughout the United States, but says this is definitely a once in a lifetime opportunity.

"I'm very excited, this doesn't come around every day... especially having just turned 25, having just graduated with my Master's Degree, I just can't believe I'm able to share my gift of music with such an event," said Hey via Skype on Tuesday.

Hey's mother will be traveling from Milwaukee to New York City on Wednesday, to join her son at the Mass at Madison Square Guarden on Friday.

"I'm absolutely proud to be representing Milwaukee, my family is there, all my friends are there... it's a great place to come from and it definitely set me up for what I do here now in New York," Hey said.