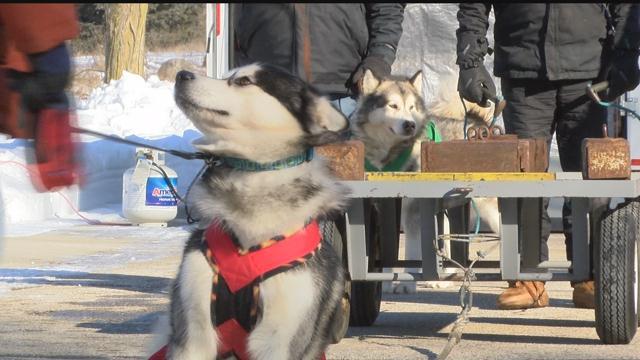 This weekend's weather affected a number of outdoor events. Some on Sunday have been canceled because of a windchill advisory.

At the Waukesha Janboree it was so cold, in fact, that most of the outdoor events were taken off the schedule - except for one event where participants seem get better the colder it gets.

Imagine a tractor pull - but with big fluffy dogs.

"On a day like this you'll bring 'em in. They'll come in for 5-10 minutes and they'll want back outside. It's too hot in the house," dog owner Ken Marsicek said.

"And I've had dogs that sleep out in the snow instead of going in their doghouse when it's 25 below zero," Scott Bell, another dog owner, said.

Bell was co-chair of the event Which was one of the only outdoor events remaining at the Waukesha Janboree. They stand alone because of cold weather conditions Which could cause frostbite on bare skin in fifteen minutes.

"So we're trying to keep people inside. They can be out a little bit but it is pretty cold today," Special Events Coordinator for the city of Waukesha, Joanna Adamicki, said.

So the event drags on. There's no baiting, meaning no treats allowed on the space where the dogs pull.

"We have a cart. We put weight on it. And we have each dog pull it 16 feet. Then when all the dogs have done it we add a couple hundred pounds on the cart and go through all the dogs again until we get a winner," Bell said.

Experienced dogs await their turn as novice pups get owner assistance. The breed of dog doesn't even shiver while sitting still in nearly zero degree weather (plus the wind).

"Well they have a double coat. They have an outer guard coat which is longer fur and it helps to shed moisture. And then they have a real soft downy undercoat that keeps 'em warm," Bell said.

That strategy should be the same for people headed outside: layer clothing and don't expose skin.

"There's been times where I've come back from dog sledding and this has all been total ice," Bell said, pointing at his moustache.

The people that have been doing this sort of thing for years have some advice: build up your wardrobe, buy ski pants, and don't try to act touch in front of your Alaskan Malamute.

"I'm probably not quite as tough as the dogs but, yeah, we like being out in the winter," Bell said.

Even participation was down at the dog pull with only about twelve humans bringing animals to compete. Even people with a dog sledding background want to avoid the cold sometimes, organizers said.