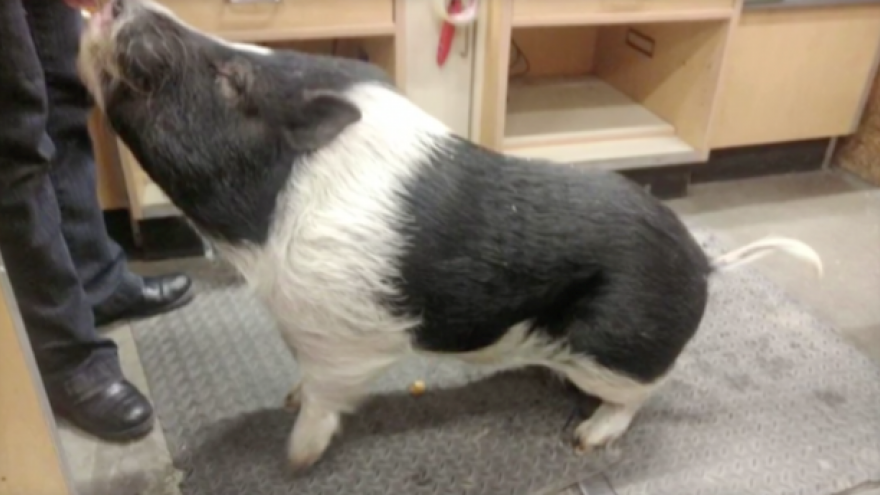 (CBS) A little piggy named “Hamlet” went to the market this week after 60 mph winds blew his house down.

Shortly after a gust of wind knocked down his fence in Portage, Michigan, the pet pig was on the move. He crawled through the broken fence and walked nearly a mile to the nearest Home Depot store.

It was an unusual sight for employees, like Amanda James, who first spotted the black-and-white spotted animal approaching the entrance.

“We looked out the side door and there was a pig on the hill,” James told CBS affiliate WWMT. “He’s super friendly, he’s very sweet, doesn’t make too much noise, believe it or not.”

Home Depot employees quickly befriended the small pig, giving him biscuits and patting his round belly as he oinked with delight. Unsure of what to do with the creature, James decided to hold him in her garage until his owner was located.

“My first thought was ‘this has got to be someone’s pet,’” James said. “If it were my animal missing, I would want them to do the same thing.”

She then posted a photo of Hamlet on a Facebook page for lost pets in the Kalamazoo area, hoping someone would claim the little lost pig. Within a few hours, the post was shared by nearly 500 people.

“Even the pigs are flying out of yards in this wind!” one Facebook user commented.

“When pigs fly, definitely applies in this windy situation,” another said.

By 1 p.m. on Wednesday, the Facebook group gave Hamlet’s loyal followers a happy update: The pig had been “reunited” with his owner.

“And this piggy went wee wee wee all the way home,” the group joked.

An emotional Rachael Fairbotham, Hamlet’s owner, picked up the pig from James.

“I was happy, I almost cried when I finally saw him. I didn’t think I would again,” Fairbotham told WWMT.