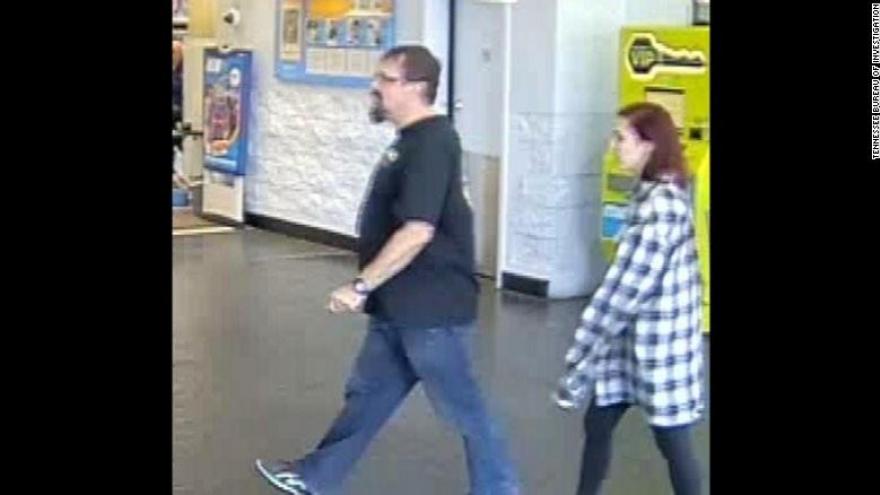 (CNN)The wife of the former Tennessee teacher accused of absconding with 15-year-old Elizabeth Thomas wants to end her marriage of 31 years, according to court filings.

Jill Cummins, who has pleaded with her husband to bring Elizabeth home, filed the documents last week, citing irreconcilable differences and alleging that Tad Cummins is \"guilty of inappropriate marital conduct.\"
Under the Tennessee law that provides 15 grounds for divorce, she selected the section that says, \"The husband or wife is guilty of such cruel and inhuman treatment or conduct towards the spouse as renders cohabitation unsafe and improper, which may also be referred to in pleadings as inappropriate marital conduct.\"
What you're looking for

Elizabeth Thomas: The 15-year-old has light brown or blond hair and hazel eyes. She is 5 feet 5 inches tall and weighs 120 pounds. She was last seen wearing a flannel shirt and black leggings.

Tad Cummins: The 50-year-old has brown hair, brown eyes and a gray goatee. He is 6 feet tall and weighs about 200 pounds. He is believed to be armed.

Jill Cummins demands alimony for life, as well as attorney fees. The pair have two children but they're both adults, so there is no mention of child support.
It was the first marriage for both, the court documents say.
\"It's difficult, but as we've said she is trying to as much as possible to move forward and move on, not an easy thing to do. And with everything that is swirling around with Tad and Elizabeth, she is understandably wanting to try to remain as private as possible with this process,\" her attorney, Michael Cox, told CNN in an email.
Jill Cummins hired Cox last week to assist in her divorce, the lawyer said.
Cummins lists March 13, the day her husband allegedly disappeared with Elizabeth, as the date they separated. She says she's had no contact with him since that day, according to court documents. Cox said he did not have any details regarding their last interaction.
Timeline: From kissing allegation to manhunt
The Maury County Chancery Court permitted Jill Cummins to serve her husband with divorce papers via publication in the local newspaper because \"defendant cannot be found at his usual place of abode ... and there is just ground to believe he is gone beyond the limits of the state
Tad Cummins, a former teacher at Culleoka Unit School, disappeared with Elizabeth, a freshman and onetime pupil of his, weeks after a student reported seeing the two kissing in his classroom.
The school couldn't prove the allegation, but the Maury County Sheriff's Department later leveled a charge of sexual misconduct with a minor against the 50-year-old. Tad Cummins also stands charged with aggravated kidnapping.
Investigators say they believe the two were in Decatur, Alabama, hours after a friend dropped Elizabeth off at a restaurant in Columbia, Tennessee, on March 13. Two days later, they were captured on surveillance cameras at an Oklahoma City Walmart.
Tad Cummins bought food with cash, police said. It appears that he may have darkened his hair, while Elizabeth's hair may be red, according to police.
Authorities say there have been no other credible sightings despite more than 1,200 tips from all over the country.
Jill Cummins made a tearful entreaty to her husband four days after police issued an Amber Alert for Elizabeth.
\"Tad, this is not you. This is not who you are,\" Jill Cummins pleaded during a news conference. \"Please do the right thing and turn yourself in to the police and bring Beth home. ... We can help you get through this. No matter how far you've gone or what is happening right now, God's grace is sufficient for you and he wants you to come home.\"
She later released a statement to NBC News, saying, \"Nobody understands the pain and shock I am in now.\"
She again addressed her husband directly: \"You know you can't hide forever and for Beth's sake please go to the police or please just drop Beth off somewhere safe. ... I know you are afraid and I know that a part of you is really sorry. It's not too late.\"
During the investigation into the kissing allegation, Elizabeth denied the accusation and told a school official that she has been to church with Tad and Jill Cummins.
The school's investigative report says that Tad Cummins also denied the allegations and said, \"He loves his wife and has never cheated on his wife and would never do anything to jeopardize his marriage.\"
Share this article: