What to know before Tuesday's Supreme Court primary 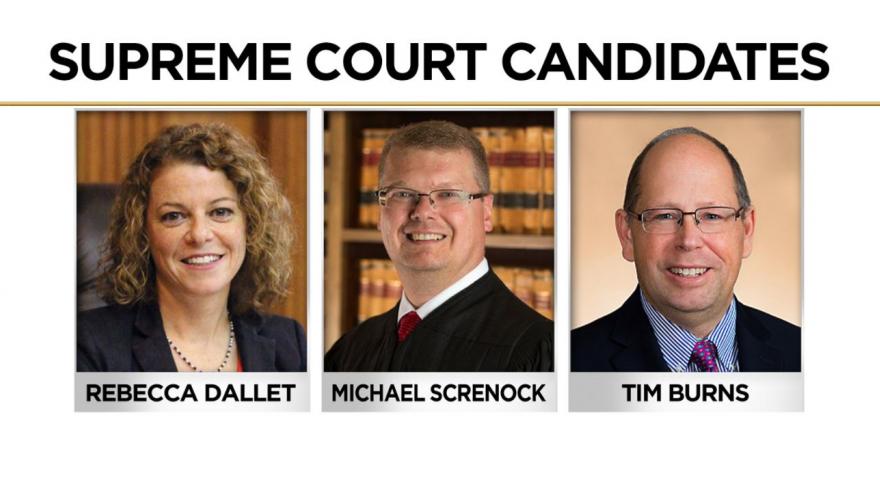 MADISON, Wis. (AP) — The only statewide race on Tuesday's primary ballot is for a seat on the Wisconsin Supreme Court. The two highest vote-getters will advance to face each other in the April 3 general election. The winner will replace Justice Michael Gableman, who decided not to seek a second 10-year term.

Here are key facts to know before voting:

WHEN ARE POLLS OPEN

Polls are open statewide from 7 a.m. to 8 p.m. on Tuesday. Photo identification is needed to cast a ballot and voters can register at the polls. Turnout for spring primaries is low and has traditionally been less than 10 percent.

WHY DOES IT MATTER

The state Supreme Court is currently controlled 5-2 by conservatives. The outgoing Gableman is one of the five conservatives. That means whoever is elected won't shift control of the court away from conservatives but could lessen their strong majority. Burns and Dallet are supported by Democrats while Screnock is backed by Republicans in the officially nonpartisan race.

Dallet has the endorsement of more than 200 judges and more than 150 other elected officials. Burns is supported by Our Revolution, the political arm of Vermont Sen. Bernie Sanders' operation; liberal Democratic U.S. Rep. Mark Pocan; Democratic Senate Minority Leader Jennifer Shilling; the Working Families Party; and Citizen Action of Wisconsin. Screnock has been endorsed anti-abortion groups Wisconsin Family Action, Right to Life Wisconsin and Pro-Life Wisconsin, as well as the Wisconsin Realtors Association, dozens of county sheriffs, the state chamber of commerce and the National Rifle Association.

Conservative groups backing Screnock have spent nearly $670,000 on television and other advertising to benefit his campaign, according to a tally by the liberal group One Wisconsin Now. Most of that money — about $550,000 — has come from Wisconsin Manufacturers and Commerce, the state chamber of commerce and the conservative group Wisconsin Alliance for Reform. The state GOP has given Screnock more than $142,000 in in-kind contributions for digital ads, staff and direct mail. Both Dallet and Burns spoke last year at the state Democratic Party convention and their campaigns are run by liberal strategists. Dallet has criticized Republican President Donald Trump in a television ad and spoken out against the state Supreme Court ending the investigation into Republican Gov. Scott Walker. Burns is running as a Democrat and has expressed liberal positions on numerous issues that judicial candidates traditionally have stayed away from.

Burns argues that calling Supreme Court races non-partisan is a charade given all the Republican and Democratic money and support that goes into the election. Burns said he will use his seat on the court to fight Walker's agenda and stand up for liberal values, including opposing powerful deep-pocketed special interests, photo ID requirements to vote and partisan gerrymandering. Dallet argues that conservatives have politicized the courts and she would advocate for empowering women, fighting for clean air and water, and combatting opioid abuse. Screnock argues that he's beholden to the rule of law. He's said it was a "privilege" to be one of the attorneys who defended Walker's Act 10 law, which took away collective bargaining rights from public unions. He also worked on the legislative maps that are currently being challenged in the U.S. Supreme Court in a gerrymandering case.

Screnock was twice arrested as a college student in the 1980s at an anti-abortion rally outside of a Madison abortion clinic. Screnock has said he doesn't regret his actions and he could still rule impartially on cases involving abortion. Burns has little experience litigating in Wisconsin courtrooms, having argued only one case in state court and six in federal court in Wisconsin. He's the only non-judge in the race and his career has been focused on representing corporate clients in insurance disputes. Both Dallet and Screnock have said that Burns' unusual approach of taking positions on issues that could come before the court means he will have to recuse himself from many cases. Burns argues that he won't have to do that because he hasn't said how he would rule on any particular case.