What some McDonald's mozzarella sticks need 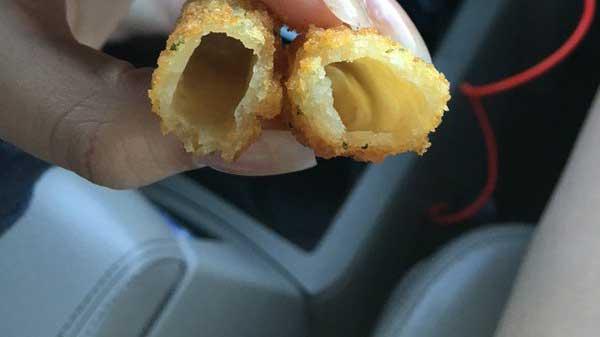 Customers are taking to social media to post photos of hollowed-out mozzarella sticks, complaining that the dish lacks the central ingredient they paid for: cheese. Disgruntled customers included images of air-filled crispy tubes, with comments like, "What kind of cheese stick is this?"

The answer depends on how you look at the offering. The cheese sticks have been priced affordably, requiring a customer to shell out just $1 for three sticks. The sticks are also part of a "pick 2" campaign, allowing customers to pick two items for $2. At that price, it may prompt some customers to wonder if McDonald's is cutting the cheese to turn a profit.

But McDonald's says that the whole thing is simply a mistake.

"In these instances, we believe the cheese melted out during the baking process in our kitchens and shouldn't have been served," the company said in a statement. "We apologize to any customers who may have been affected. We are working to fix this in our restaurants."

It also added that the complaints came from a "low volume" of customers.

Despite the gaffe, McDonald's is reaping the rewards after retooling its restaurants and menu. The company's introduction of all-day breakfast last year helped boostsales by almost 6 percent during the fourth quarter. Investors are also coming back to McDonald's, sending its shares up more than 3 percent this year and more than 25 percent for the past six months.

Decided to give #McDonalds mozzarella sticks a chance. How disappointing! Only 1 has cheese?! Come on #McDonalds ... pic.twitter.com/K4whQOg5rC

Where did the Mozzarella in the McDonald’s Mozzarella Sticks go? https://t.co/SNN8UUYq4k #mcdonalds pic.twitter.com/HCWWoA1KtJ