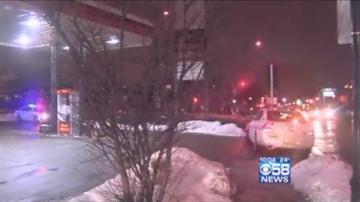 WEST ALLIS-A gas station targeted by robbers before has been victimized again.

Employees at the Kwik Pantry at 60th and National tell CBS 58 News it was robbed Thursday night.

Back in mid December, a clerk was shot during an armed robbery at the same station.

The gunman in that case was caught on surveillance, but at last report, had not been arrested.

\"I just hope nobody else for hurt,\" regular customer Tim Landers told CBS 58's Tiffany Tarpley. \" I know everybody that works here and they're all friendly.  I live close by here, it didn't used to be like that.\"

Employees told CBS 58 that everyone was okay from Thursday's incident and that the clerk who was shot in December is out of the hospital.