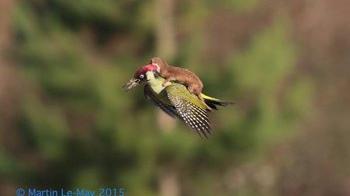 A photo of a weasel hitching a surprise lift on the back of a flying woodpecker near London has gone viral on Twitter, with more than 7,000 users retweeting the original post of the image.

It was first posted by photographer Jason Ward on Monday and credited to Martin Le-May.

The amateur photographer from Essex, near London, told the broadcaster he had been walking with his wife in Hornchurch Country Park, Essex, when they heard \"a distressed squawking\" noise and spotted the woodpecker.

\"Just after I switched from my binoculars to my camera the bird flew across us and slightly in our direction; suddenly it was obvious it had a small mammal on its back and this was a struggle for life,\" Le-May said.

Eventually, Le-May told ITV, the weasel -- known as a \"least weasel\" in some countries -- lost its grip and the bird flew away.

Marina Pacheco, chief executive of Britain's Mammal Society told CNN the image looked genuine and that it was possible an omnivorous weasel would take on a woodpecker.

\"Weasels will go for anything that looks like food -- they've got a high metabolism and they've got to eat a lot,\" she said. \"It doesn't surprise me that a weasel took a punt -- I've seen a photo of a weasel charging a group of sparrows, they're very hungry animals.\"

But she said the weasel, which would generally try to break the neck of its prey to subdue it, may have exceeded its abilities in this case.

\"I think it was a bit of a long shot -- it looks like it tried to grab the neck of the woodpecker to break it,\" Pacheco said. \"I think that it probably doesn't have a big enough jaw to bite through the spine of the woodpecker.\"

Weasels would not normally target green woodpeckers, Pacheco said -- their predators are normally the size of a stoat or larger. But the birds are known to spend a fair amount of time on the ground pulling up worms and hunting insects.

\"If the woodpecker had managed to hit the weasel with its beak it would have been the end of the weasel,\" she said. \"They're quite gung-ho little creatures.\"

The pluckiness of the weasel spawned a number of parodies on Twitter, with manipulated images showing the creature in turn being ridden by Russian President Vladimir Putin, popstar Miley Cyrus, football star John Terry -- and even what appears to be a red panda dressed in a Darth Vader costume. (Update: Twitter has now educated us on the difference between a dog and a red panda. Sorry, Darth!)

As for the bird? The green woodpecker is also known as a \"yaffle\" for its laughing call. After the shock of being targeted by a hungry weasel wears off, we can only hope it lives up to its nickname
Share this article: