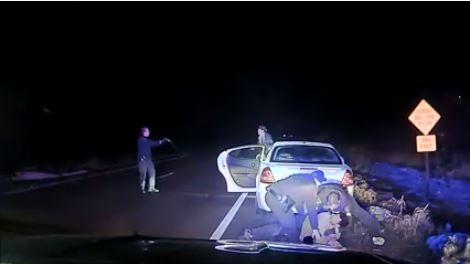 On December 11 at approximately 7:00 PM. Fond du Lac, MN Officers performed a traffic stop in the 2500 block of Big Lake Road on the Fond du Lac Reservation. The vehicle was stopped for driving without headlights.

The occupants of the vehicle were uncooperative and the driver would not give any identifying information. Officers believed that the occupants were under the influence of some type of narcotic. Officers ordered the driver to exit the vehicle. When he refused, officers talked the individual half way out of the window of the car.

When he again refused to finish exiting the vehicle, officers had to physically remove him from the car. The driver continued to resist Officers.

While the Officers were engaged in the altercation with the driver, the back seat passenger reached through window of vehicle and grabbed hold of the officer’s handgun, attempting to disarm him. His attempts were unsuccessful.

Once individuals were secured and searched, the driver had a knife in his possession and the female passenger had a BB gun that looked like a handgun, pepper spray was also located in the vehicle. Both male individuals were ultimately taken into custody and are being held at the Carlton County Jail.