Was a "Ghost Ship" Spotted on Lake Superior? 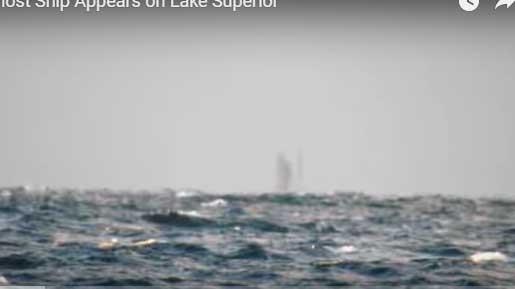 (CBS NEWS) Jason Asselin was taking in the fall foliage with a friend in Michigan’s Upper Peninsula. When they stopped at Lake Superior to photograph a gorgeous rainbow, things got spooky.

“We were looking at it [the rainbow] and noticed the object,” said Asselin. “I zoomed in and still couldn’t understand what I was seeing.”

And judging by the comments on Asselin’s YouTube video, neither can anyone else.

People are calling it a ghost ship, a mirage and an optical illusion, but the consensus is the same — no one can really explain it.

Asselin guesses the “object” was about two miles to the right of the rainbow, and it’s clear that it was stealing the rainbow’s show.

“It really just didn’t belong there, I’ve seen ships before and it looked nothing like that,” said Asselin. “I’ve been there before and never saw it before.”

Asselin contends that he wasn’t scared, just confused. His friend agreed they were seeing something inexplicable.

“He too felt it was a strange experience and out of this world,” said Asselin.

They watched it for a while, but as the sun began to set their focus shifted, giving the “ship” the perfect chance to quickly sail away into the distance.

“When I looked back there was nothing,” said Asselin. “It had disappeared.”

Regardless of what the object actually was, it’s fun to imagine a crew of very friendly pirates showing off just in time for Halloween.

Asselin sums it up best:

“I’ve seen strange things before — this sits up there with the best of them for sure.”