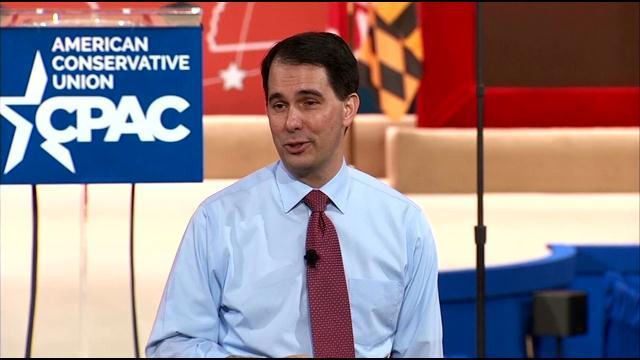 Washington (CNN) - Wisconsin Gov. Scott Walker says his home-state battles against labor unions prepare him to take on terrorism -- but he denies he's comparing the two.

Walker drew attention at the Conservative Political Action Conference on Thursday with his response to a question about how he'd handle ISIS, and the \"radical Islamic terrorism\" he condemned during his speech.

The answer allowed Walker to pivot back to his most comfortable space -- his experience battling entrenched Democratic interests in Wisconsin. But it also sounded odd: Statehouse protestors, after all, don't use weapons.

\"You all will misconstrue things the way you see fit,\" he said, \"but I think it's pretty clear, that's the closest thing I have in terms of handling a difficult situation, not that there's any parallel between the two.\"

His attack on members of the media mirrored comments he'd made days ago, when he accused reporters who'd pressed him on whether he agreed with former New York City Mayor Rudy Giuliani's comment that President Barack Obama doesn't love America and whether he believes Obama is a Christian of seeking a \"gotcha\" moment and refused to answer.

Democrats quickly pounced on Walker's latest comment, with liberal opposition research group American Bridge blasting it out to reporters and the Democratic National Committee highlighting it, as well.

\"If Scott Walker thinks that it's appropriate to compare working people speaking up for their rights to brutal terrorists, then he is even less qualified to be president than I thought. Maybe he should go back to punting,\" DNC spokesman Mo Elleithee said.

\"We need a president, a leader, who will stand up and say, 'we will take the fight to them and not wait until they bring the fight to America's soil, to our children and our grandchildren,'\" he said.

Later, in a short opening speech, he added: \"We need to show the world that in America, you have no better ally and no greater enemy. In America, we will stand up for what is right and stand against what is wrong.\"

Asked by an audience member about how he'd deal with the threat of the ISIS, Walker responded that he gets FBI threat briefings from his adjutant general and that \"without divulging confidential information,\" he's been concerned about the group for years.

That's when he turned to his experience in Wisconsin taking on the protestors.

\"Governor Walker believes our fight against ISIS is one of the most important issues our country faces. He was in no way comparing any American citizen to ISIS,\" she said in an email. \"What the governor was saying was when faced with adversity he chooses strength and leadership. Those are the qualities we need to fix the leadership void this White House has created.\"