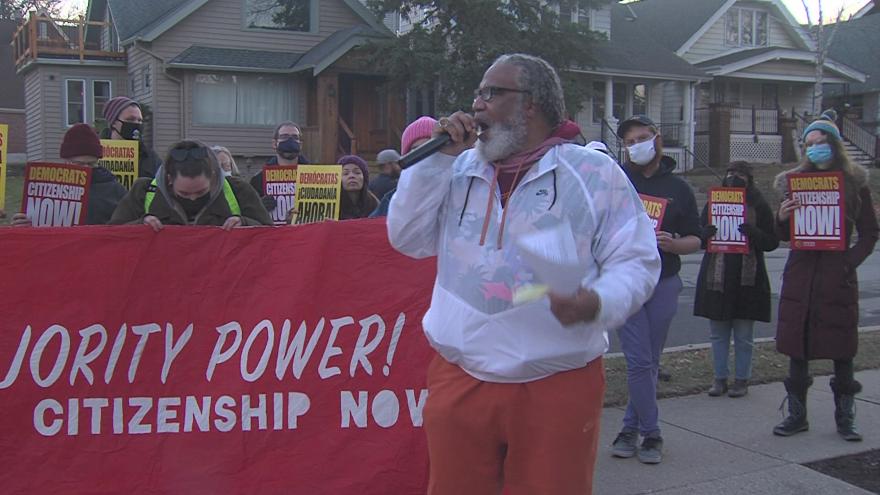 MILWAUKEE (CBS 58) -- Immigrant advocates continue to push Democrats in Congress to move ahead with reform proposals in the Biden administration's social spending bill.

The organization "Voces de la Frontera" held several news conferences across the state Monday, Dec. 13, to call attention to the upcoming decision of the Senate parliamentarian and votes by Senators.

The latest effort to include immigration reform includes temporary protections for people who are in the country undocumented. Previous efforts for full paths to citizenship were blocked by the Senate parliamentarian who advised the proposals were not appropriate for the budget reconciliation process.

Advocates say temporary protections are a step forward but still not enough.

"It still isn't adequate, today we see people with DACA or TPS and DREAMers, while they have this status and it does translate into improvement for their lives and family and community, they are still living in the shadow of that insecurity to whatever happens in different administrations," said the executive director for Voces de la Frontera, Christine Neumann-Ortiz.

In a statement to CBS 58 News, Senator Tammy Baldwin said whatever the ruling from the Senate parliamentarian, she believes Democrats should seize the opportunity to pass immigration reform.

Read the full statement from Sen. Baldwin below:

“I have long believed that our immigration system is broken and that the way to fix it is for Congress to work together to enact comprehensive reform. Unfortunately, time and again, Republicans have blocked our ability to advance bipartisan efforts to fix our broken immigration system. After four years of destructive actions from the Trump Administration, the need for us to act has only grown stronger.

“I am pleased that the House included immigration reform provisions in its version of the Build Back Better Act. The House-passed bill would extend protection from deportation and the ability to legally work and travel to millions of individuals currently living in the shadows. While this is not the comprehensive reform, including a pathway to citizenship for the many individuals that have lived and worked in this country for years, that I support, it is a significant step forward.

“We are now waiting for the Senate Parliamentarian to make a determination on whether this House-passed language comports with the Senate’s rules regarding the budget reconciliation process. She has previously determined that two more robust approaches to immigration reform were not permissible under those rules. Whatever advice on this latest proposal, I believe the Senate must seize this opportunity to advance immigration reform in the Build Back Better Act. I will continue to work with my colleagues to accomplish as much as possible in this historic moment.”