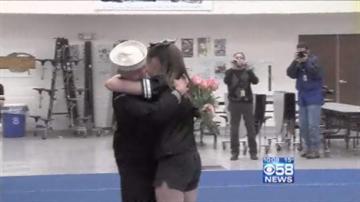 But one year later he returned and surprised his daughter Dealainey at a cheer leading practice.

His daughter collapsed when she first gained sight of him. Something that surprised dad.

\"We've been watching the youtube videos of the homecomings,\" his wife Melinda added, \"and she's like oh' he's never gonna come home, he won't come home at the right time.\"