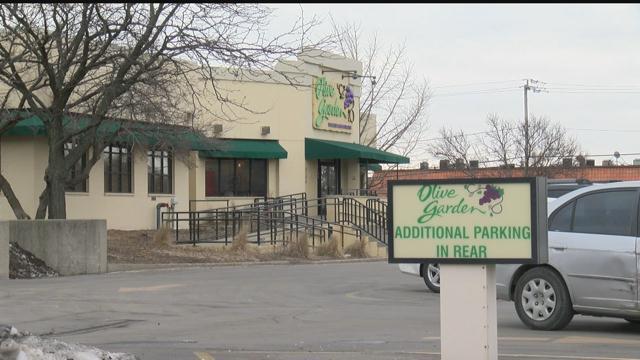 A Valentine's Day brawl at the Greenfield Olive Garden.

Police say a woman, eight months pregnant, became enraged after hearing her boyfriend was spending Valentine's Day at the restaurant with someone else.

According to the police report, that woman and her niece came to the Olive Garden to confront the couple and the brawl made its way inside the restaurant.

Oscar Peralta works as a host at the Olive Garden on 76th street. He expected a busy night on Valentine's Day, but not like this.

"I freaked out...not freaked out; more didn't know what to do. If I should step in, call police or get my manager," he said.

According to police reports, a violent brawl started in the Olive Garden parking lot when a man who was dining at the restaurant with his current girlfriend was confronted by the mother of his unborn child.

"The guy was grabbing the girl by the hair and I knew the other lady had a stick and was hitting him. Then he went to the other lady and was pushing her," said Peralta.

Police say the man's pregnant ex-girlfriend had some sort of metal club and chased both him and his new girlfriend, who is also pregnant, into and around the restaurant.

"It was all just between them. It wasn't like they all spread out. They went from the lobby to the hallway to the bathroom," said Peralta.

All the while, Peralta was on the phone with 911 dispatchers.

"I was just like pick up, pick up and get my information as soon as possible. Because once it came to the door anything could have happened," said Peralta.

The brawl finally made its way back outside and that's when police showed up. Peralta says most diners were probably none the wiser, but he's glad things didn't turn out worse.

"She could have had a gun or a knife and it would have gone worse, but thankfully that's a part that didn't happen," he said.

We're told all parties involved will be OK, but the woman who confronted her ex-boyfriend was issued a citation for battery.