USS Fitzgerald captain, 2 senior officers will be relieved of duty 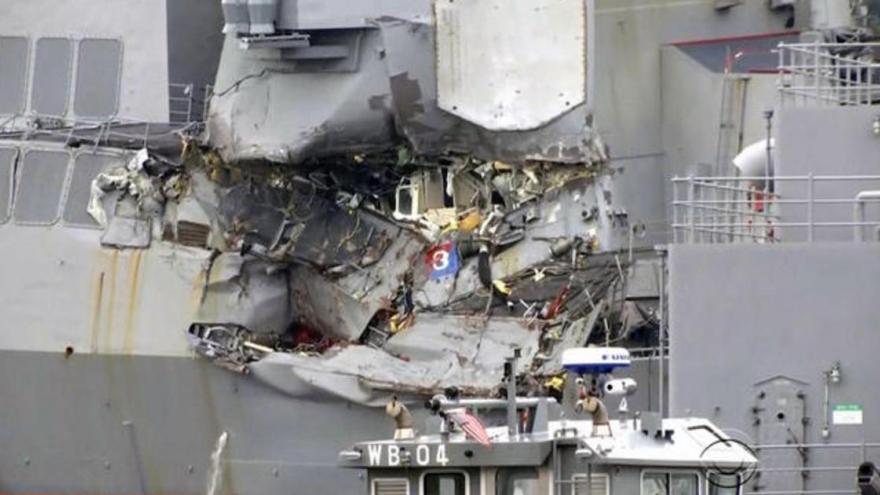 PENTAGON -- The captain of the destroyer, USS Fitzgerald, two senior officers and at least a dozen sailors are being disciplined for the horrifying collision that killed seven sailors in June off the coast of Japan.

The captain at the time, CDR Bryce Benson, a native of Green Bay and a 1999 Marquette University graduate,  has been relieved of duty, as were two other senior officers, CDR Sean Babbitt and Master Chief Petty Officer Brice Baldwin.

Thirty-five sailors were asleep in a compartment when the bow of the Philippine ship punched a 17-by-13 foot hole in the Fitzgerald's hull. Seven sleeping closest to the hole drowned but 28 somehow made it out alive, even though the entire space was nearly flooded within 30 to 60 seconds.

The Navy's harrowing recreation of those terror-filled seconds was put together to answer the one question all the families of the dead had: Did they suffer? The answer: Not for long.

The collision sent sailors, lockers and televisions flying. With water rushing in on the starboard side, they started yelling "water on deck," and "get out," scrambling toward a ladder on the port side.

"After the initial shock," the report says, the sailors "lined up in a relatively calm and orderly manner to climb the port side ladder ... even though (they) were up to their necks in water by that point."

Two sailors stayed at the bottom of the ladder, helping others up. When those two finally climbed out they stayed at the top of the ladder and reached down underwater to pull two more to safety before they had to retreat to another level to seal the flooded compartment from the rest of the ship.

One of the dead, Gary Rehm, was buried Wednesday at Arlington National Cemetery. According to the report, he rescued a sailor trapped under a fallen locker.

The ship's captain, along with the officers and men on watch that night are considered to have made critical mistakes which caused the collision.