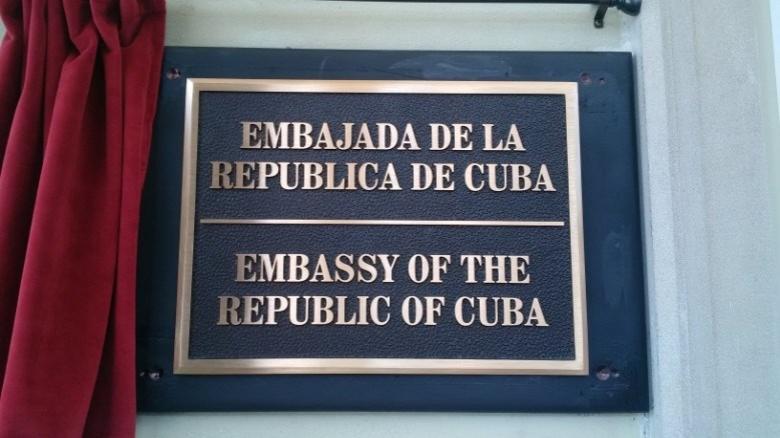 Havana, Cuba (CNN)One bitter holdover of the Cold War slipped into the history books at 12:01 a.m. Monday, when the United States and Cuba re-established diplomatic relations. For the first time since severing ties in 1961, they reopened embassies in each other's capitals.

Cuban Foreign Minister Bruno Rodriguez Parrilla traveled to the Cuban Embassy in Washington to raise his country's flag, an event that Cuban government officials said would be broadcast live on the island's state-run TV.

A Cuban delegation of diplomats, artists and veterans of the revolution commemorated the breakthrough with about 500 guests and more than likely down a few celebratory mojitos and shots of Havana Club rum.

U.S. diplomats in Havana have readied everything from new business cards to the embassy sign. But the festivities and flag-raising will have to wait for Secretary of State John Kerry's visit -- the highest-level trip by a U.S. official to Cuba since the 1959 revolution -- for the embassy reopening ceremony in August.

Starting Monday, U.S. officials said, the Cuban government will pull back some of the tight cordon of security that had surrounded America's diplomatic mission in Havana and no longer record the names of Cubans entering the building.

The Cuban and American heads of their respective Interest Sections will became charges d'affaires until ambassadors are named.

Plenty of longtime enmity to overcome

\"A new stage will begin, long and complex, on the road toward normalization,\" Cuban President Raul Castro said in a televised address last week to the Cuban people. \"Which will require the will to find solutions to the problems that have accumulated over more than five decades and hurt ties between our nations and peoples.\"

If there were ever two countries in need of a \"new stage\" of relations, they are Cuba and the United States.

The United States had blasted the Cuban government's seizure of American property and the summary executions of officials from the Fulgencio Batista regime that Castro had overthrown.

\"There is a limit to what the United States in self-respect can endure. That limit has now been reached,\" President Dwight D. Eisenhower said, announcing the rupture.

Swiss diplomats took over the maintenance of the seaside former U.S. Embassy and the sprawling ambassador's residence in Havana.

The failed U.S.-backed invasion at the Bay of Pigs, Fidel Castro's declaration that his revolution was socialist, repeated CIA plots to assassinate Castro, and the Cuban Missile crisis further poisoned affairs for the decades that followed.

But in 1977, during a brief period of improved relations in the Carter administration, Cuba and the United States opened Interests Sections in their former embassies.

A step below embassies, Interests Sections allowed the Cold War foes to have diplomatic dealings without officially restoring relations.

Diplomats returning to the old U.S. Embassy in Havana found years of dust accumulated on the furniture and calendars from 1961 still on the walls.

Since the United States couldn't fly the American flag or name an ambassador to Havana, there were no obvious signs of a large U.S. diplomatic presence in Communist-run Cuba.

\"Most Americans who visit Cuba seem to think there's no relationship, there's just a tiny room in the Swiss Embassy. And every day they are driving past the old embassy, but they don't know there's an embassy because there's no flag,\" said Vicki Huddleston, who was chief of the Interests Section from 1999 to 2002.

With 51 Americans and 300 Cuban employees, the U.S. Interests Section is one of the largest diplomatic missions of any country in Cuba.

But instead of improving relations with Cuba, the Interests Section often served as a lightning rod for confrontation.

The Cuban government plastered propaganda around the building, including one iconic sign that showed a fatigue-clad revolutionary telling a hissing caricature of Uncle Sam, \"Mister imperialists, we are not the least bit afraid of you!\"

Fidel Castro called the section \"a nest of spies\" and led frequent marches with hundreds of thousands of supporters in tow to protest U.S. policies.

Tarantulas would show up in the oddest places

\"They had 3,000 to 4000 people that were focused on our personnel, trying to recruit them or harass us,\" said James Cason, the chief of the Interests Section from 2002 to 2005. \"They would break into your house and do things to show they had control of your existence. In my days, if they knew you didn't like spiders, you would find a tarantula wandering around your room.\"

Cuban diplomats serving in the United States complained of similar harassment at the hands of American minders.

Sometimes the intimidation backfired, as when Huddleston was informed that her Afghan hound, Havana, could no longer take part in local dog shows.

\"You have been thrown out of the dog club because of your country's policies and your actions,\" Huddleston said the letter of expulsion read.

But negative publicity over the incident led Cuban officials to declare it all had been a mistake, since the dog really belonged to Huddleston's husband.

\"The Cubans were really embarrassed,\" Huddleston said. \"Fidel said he would give my husband's dog a pardon. \"

Sometimes it was the United States that sparked diplomatic incidents, such as in 2006 when diplomats installed an electronic ticker across the top floor of the Interests Section to display information the Cuban government didn't want reported.

\"We decided we would talk over the heads of the regime by putting the moving billboard in the top floor of our windows,\" Cason said. \"And one day, to the surprise of the regime, we started off with, 'People of Cuba, how come we can go to your hotels and you can't?'\"

The Cuban government responded by erecting a \"forest\" of 138 flag poles to block out the offending American messages. Eventually both the ticker and the flags came down.

'We have a formal relationship'

Despite the clashes that often grabbed headlines, in recent years the United States and Cuba have quietly increased cooperation on combating drug smuggling, migrant interdiction and protecting the environment.

Working together on areas of mutual interest is only likely to increase with the restoration of diplomatic relations, said John Caulfield, chief of the Interests Section from 2011 to 2014.

\"As an Interests Section, we were kind of radioactive for Cubans,\" Caulfield said. \"This is a signal to Cuba and all Cubans that even if we don't have a normal relationship, we have a formal relationship.\"

Caulfield said during his final years in Cuba, the thawing of relations was already underway, although his time in Havana was not without its intrigues.

Despite the ban on raising the American flag at the Interests Section, Caulfield said his staff presented him with a memorable and clandestine present when he finished his posting.

\"They gave me a flag they had snuck up in the middle of the night and gave it to me as a going-away gift, and I really appreciated the gesture,\" Caulfield said.

Soon the United States will for the first time in 54 years again fly the American flag in Havana for everyone to see.