Update: Father in custody following 1-month-old hospitalized after being given bottle of vodka 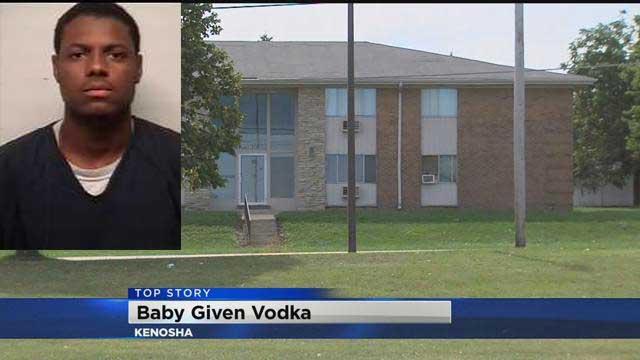 A one and half-month-old Kenosha baby is being treated at a local hospital after being given a bottle filled with vodka.  Police said the baby was admitted to the intensive care unit with a blood alcohol level of .294.  According to a BAC chart for adults, at .25 and over all mental, physical and sensory functions are severely impaired and there is an increased risk of asphyxiation from choking on vomit.  A lethal dose of alcohol for adults is considered between .40 and .50 percent.

The mother put a water bottle on the counter to be mixed with formula. The mother left the room and the child's father emptied the bottle and filled it with vodka intending to take it to a friend's house. The child's mother prepared the formula using the liquid from the bottle. After a while, the child's parents noticed that the child was not behaving normally.

The parents argued about whose fault it was their child was given vodka.

The infant's father was arrested following an argument that began following the incident. The father choked the child's mother, battered another family member, and resisted Police Officers as they attempted to place him under arrest.

Brian Smith, the father, was arrested for strangulation, 2 counts of Battery Domestic Abuse, 1 count of Resisting Arrest and 1 count of Disorderly Conduct.

The family said once the father found out the baby was fed a bottle of vodka instead of formula, he got into a big fight with his girlfriend that led to domestic violence.
\"He's going to drink some liquor he was getting ready go outside to put in a water bottle and then mom use the water bottle and poured it in the formula by mistake it was a big mistake,\" said Allen Jones, the grandfather.
Now charged with five counts including battery and strangulation, smiths father stands by his son.
Police say the baby is doing better and is being released from the hospital today.

CBS 58's Sarah Barwacz has done a series of reports you'll find attached to this text.