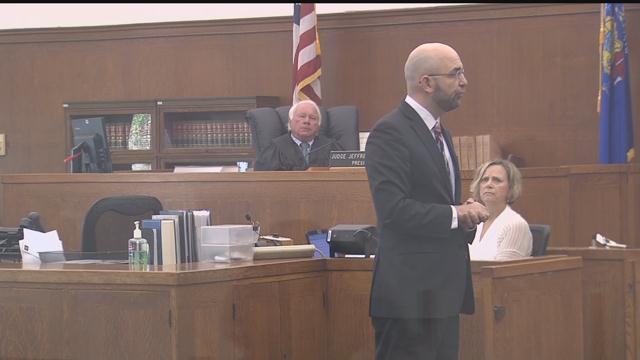 The jury is in deliberation on the Michael Morgan case. The jury recessed at 5 p.m. and will continue deliberation Friday morning. Morgan faces 9 counts including arson, battery and two counts of 1st degree reckless homicide.

All afternoon, the jury closing arguments.

Defense Attorney Carson said there is no evidence that puts Morgan at the crime scene. He explains other people in the home could have set the fire, or it could have been a hit man, but Carson says it was not his client.

"And I shouted, 'Did you burn this house?" and he looked at me straight in the eye, and you watched his response. Was there a flicker? Was there a looking away? Was there a question in his face?" said Christopher Carson Scott, Defense Attorney

The prosecution explained to the jury the motive Michael Morgan had. Attorney Huebner saying gasoline was found doused in two places: the bed he couldn't sleep in, and the loveseat he couldn't sit on after he was kicked out of his home.

"You are to search through truth. You are not to search for doubt. And what defense counsel just did was was he speculated, and he went through doubt, and he accused pretty much every single person in the Rice family of being the perpetrator," said Grant huebner, Prosecuting Attorney.

The parents of Tae'najah Morgan say they miss their smart, happy two year old that loved to take selfies.

"It's been a real rough year for me; real rough. Like I said I'm heartbroken. I'm not myself anymore. I just got to find a way to get back to myself. Because I miss
her so much, and I carry her everywhere I go," said Lakeashah Morgan. In Morgan's hands was a small, pink urn.

The parents say they're so thankful to hear Tae'najah's cousin, Kevin Little was found over their daughter, protecting her during the fire.

"He was a protector anyway, even when he used to come by the house he always protected his sisters and brother. Always, always... and his last moments was protecting his little cousin.

Michael Morgan took the stand at his own trial. On the third day of the jury trial, the the state rested.

Throughout the trial, the gallery has been full. The family of the two children that died in the fire have listened to every witness, and many of them also took the stand as witnesses.

Before the state rested, the jury heard from a witnessed who mapped Michael Morgan's cell phone usage the night of the fire. The records show that Morgan's phone was off or in a dead zone during the crime. Around 3:15 a.m. his cell got service again, and was located near his home.

The state also called a witness to the stand who said during a conversation with Michael Morgan, Morgan confessed to setting the fire. The witness asked not to be identified for fear of retaliation.

Witness: He told me he was into it with his wife at the time. He said he set a fire to scare her. He said he didn't know it was going to blaze that fast, and when it did he ran to the gas station to try to call and get the fire put out...
Prosecutor: Did he indicate why he set this fire?
Witness: She was trying to leave him trying to leave him...

Morgan says she wasn't at the home the night of the fire, but spoke to her mother and her daughter Tae'najah right before the kids went to bed.

According to the state, Michael Morgan was seen by witnesses leaving the crime scene with a black hoodie and tan skull cap. Michael Morgan's mother took the stand Wednesday afternoon, and said Michael didn't own either piece of clothing. She claims his ex-wife kicked him out of the home with only the clothing he was wearing.

Sheila Washington, Morgan's mother says he is a great father, and he didn't visit his children in the hospital after the fire because of a no contact order.

When Michael Morgan took the stand, he recounted details from the night of the fire.

Morgan says he was left his mother's house during the time the fire happened, but he claims it wasn't him because he doesn't own a black hoodie or tan skull cap.

Morgan is accused of setting a north Milwaukee home on fire last year, killing two children inside: his 10-year-old step-son and his two-year-old niece

Nearly a dozen witnesses took the stand Tuesday. Much of the testimony centered around the fire and the arson investigation that followed.

A few key pieces of evidence were discussed.

A gas can found under the kitchen sink, state exhibit 144. The gas can belonged somewhere else in the home. Investigators believed it was used to set the fire, although no fingerprints or DNA was found on the gas can.

Crates and a picnic table that were piled in front of the back door of the home, state exhibit 29. Sandie and Areiel Rice put the barricade up weeks before to keep Michael Morgan from breaking into the home. Testimonies from grandmother, Sandie Rice on Tuesday claim that barricade was in tact before the fire, and when the family exited the home during the fire, the barricade was cleared.

Sandie Rice was watching the children the night of the fire while mother, Areiel was working. Sandie Rice admitted to having a few beers and smoking a joint, but says she never saw Michael Morgan that night, or heard anyone in the home. Everyone had already gone to bed when the fire started.

Sandie Rice says her 10-year-old grandson, who later died from the fire, woke her up that night.

Rice had to grab tissues after recalling the moment she realized two of her grand kids were still inside the burning home.

Sandie Rice: "I ran to the neighbors to ask for some help."
Prosecutor: "Did you make it outside?"
Sandie Rice: Yes. We made it outside, but when I got outside I didn't have two of them."

Lieutenant Daryk Wendlick with Milwaukee Fire Department was with the first fire crew on scene at the home. Sandie Rice says the smoke was too thick for her or any neighbors to go back in the house.

Lt. Wendlick immediately went to save the children inside before fire teams with water arrived.

Lt. Wendlick explained to the jury the state he found the children in. He says the home was filled floor to ceiling with smoke.

"He did not appear to be -- you can't really see, but just based on my assessment of the second floor there was no fire up there. They were motionless," said Lt. Wendlick.

Department of Justice Criminal Investigations Special Agent and Fire Marshall, Michael Reimer, surveyed the house. He says he believes the it was set on fire after finding gasoline doused throughout the home, and finding the gas can in the kitchen where it didn't belong.

"There is no other explanation as to how that fire originates in the southwest corner of that living room," said Agent Reimer.

A trial is underway for Michael Morgan, a Milwaukee man who's charged with killing two children in a house fire, a blaze prosecutors say Morgan deliberately set. Opening statements were presented today.

A number of witnesses were called to the stand after the jury was selected, including the mother of the 10-year-old boy that died from the fire.

10-year-old Kevin Little and his two-year-old cousin Tae'najah Morgan both died in the hospital days after the fire.

In court, the state said Kevin Little acted heroically during the fire. The 10-year-old was found in the smoky home protecting his two-year-old cousin with his body.

The fire happened 8 days before Kevin Little's mother, Areiel Rice would show up in court for domestic violence charges against her then-husband Michael Morgan.
Morgan is facing those charges and the arson and homicide charges in this trial.

The court also called two police witnesses on Monday. Both had responded to a domestic situation in 2014.

The state claims during that incident Morgan said if Rice would leave him she wouldn't "come out alive." Rice confirmed Morgan threatened her.

The state also said they will bring a witness that saw Morgan walking away from the North Milwaukee home while it was on fire, and another witness identified
Morgan soon after at a nearby gas station.

The defense says they'll bring on alibi witnesses that put Morgan far away from the crime scene.