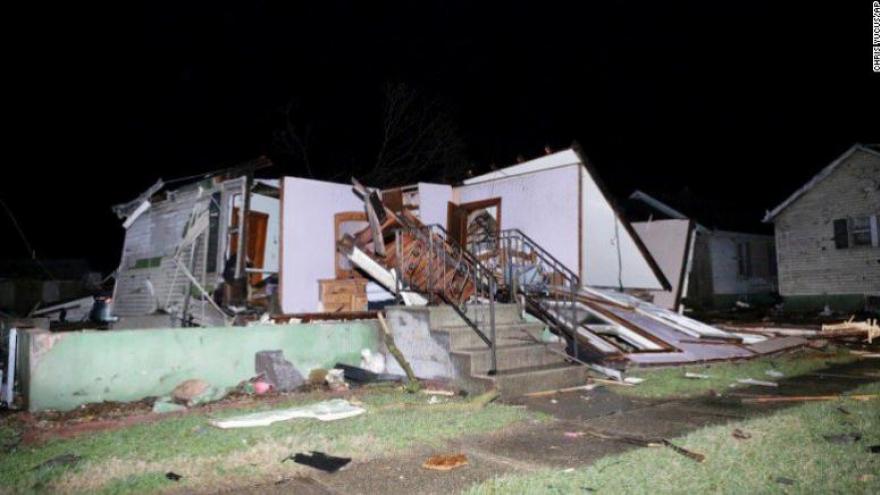 (CNN) The Midwest was hit with severe weather as a string of tornadoes ripped through several states Tuesday, and meteorologists expect severe thunderstorms to spread across the region throughout Wednesday.

In the wake of the tornadoes' aftermath, two people were killed, others injured and cars were scattered on highways.

Close to 100 million people are at risk for severe weather through Wednesday afternoon, according to CNN meteorologist Michael Guy.

The National Weather Service reported that 21 tornadoes ripped through the states of Illinois, Missouri, Tennessee, Indiana and Iowa.

Missouri State Patrol Sergeant Al Nothum told CNN a man driving down the freeway was killed south of Perryville, Missouri, after a tornado blew up to 20 vehicles from a junkyard onto the Interstate. Nothum added there were several injuries, most among the drivers and passengers in three tractor trailer rigs also struck by the debris.

Authorities in Ottawa, Illinois, said another man was killed after being struck by a falling tree. Ottawa Police Captain Dave Gualandri said other residents in the town were injured.

J.R. Wright told CNN affiliate KTVI that he was driving through Perryville when he saw what he characterized as "a disaster zone." He added when he got out of his car all he heard were "people screaming and crying. There were two or three women running up and down the road looking for their husbands."

Linda Maguire had also been on the highway when the storm hit. "I was driving back to school in Murray, Kentucky, and the wind was blowing something fierce."

"Right as he told me, I saw a tractor trailer was flipped over right off the side of the road. I saw two or three of them, and two cars in front of me were at a complete stop. The tornado had just passed. There were cars scattered all over the highway and the hills looked like a scrap yard."

All residents in the area south of Perryville impacted by Tuesday night's tornado have been accounted for,

"We're now just trying to clear the roads the best we can, so we can start cleaning up in the morning," he said.

A nursing home in La Salle County, Illinois, also suffered damage from the storms but reported their residents were all accounted for and safe.

Multiple first responders have also been dispatched to Naplate, Illinois, after reports of damage from a tornado, according to CNN affiliate WBBM. Naplate is a small town just west of Ottawa, Illinois.

Along with tornadoes and strong winds, the National Weather Center reported substantial hail throughout the region.

Severe thunderstorms are expected to spread across the Ohio and Tennessee Valley region and stretch into southern New England through the afternoon, according to the National Weather Service center

Residents could see damaging winds, tornadoes and hail on Wednesday.