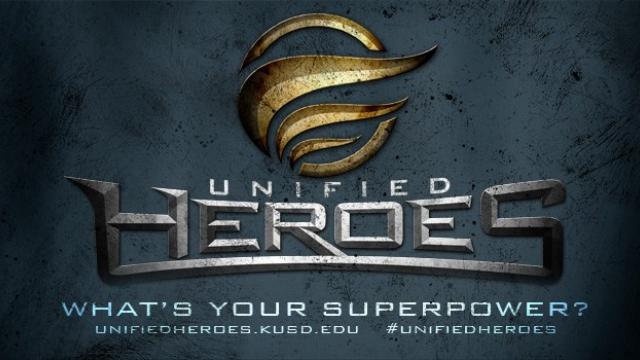 Tanya Ruder, the district’s chief communications officer, said the idea behind the campaign was to highlight student’s stories and successes.

This is the first time the district has done a campaign like this.

Work on the campaign began last school year, when school principals and councilors were asked to nominate students who have incredible stories to share.

In all, only 15 students were selected for the campaign, but Ruder hopes to continue the project in the future and continue to highlight students.

The ‘heroes’ and their stories are featured in the school district’s calendar, posters throughout the city, and in videos, which are on the district’s website.

“We want our community and our world to know, this is your future, this is what you to loOK forward to these are the amazing kids who go to Kenosha unified. And they are our heroes and they should be theirs too,“ Ruder said.

Ruder went onto say that the district has seen a really positive response from the community about the campaign.

CBS 58’s Kyle Aevermann met with three of the students featured in the campaign.

All three seemed to be a little bashful about being called a hero.

5th grader Comfort Lawrence, moved to Kenosha when she was just 7 years old from Ghana.

She was adopted, and says while she could understand and read English, she couldn’t speak it that well. That has changed over the past few years.

6th grader Amanda Becker is also featured in the campaign. She has a noticeably positive outlook on life.

When she was just a baby, doctors had to amputate her leg because of a birth defect. She now uses a prosthetic leg to get around.

She says sometimes people will stare, and while it can be uncomfortable, she doesn’t let it stop her.

Becker is a full pledged athlete. She’s been swimming since she was 4. She does field, wheelchair basketball, and is about to start golf.

The district says Becker takes pride in being herself and isn’t afraid of a challenge. Something Becker admits to.

“If you don’t want to do this, ok, but at least try. So I hope that that gives them at least the motivation to try something even if they don’t want to do it anyone. I think it’s important to try things no matter what,” Becker said.

He is also a self described nerd who loves comic books and superheroes. So to be featured as a hero in a comic book style way, is “kind of cool” according to Batson.

Batson also says he doesn’t care what others think of him. He doesn’t care about being popular, he believes in just being himself.

The students will also be featured on an upcoming episode of CBS58 Sunday Morning.