Uber Driver's Shooting Rampage: What We Know and Don't Know 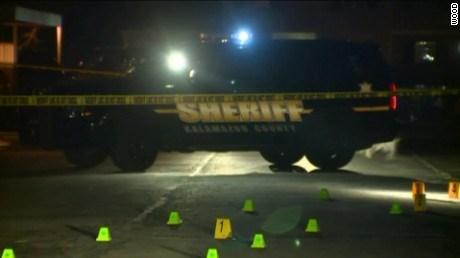 CNN) For seven hours, the shooter drove from one target to another, police said, gunning down victims at random.

And in between the shootings, he apparently picked up passengers for Uber.

As families mourn the deaths of six people in Kalamazoo County, Michigan, one question looms above all else: Why did the gunman do this?

Here's what we know and don't know about the attacks:

Around 5:42 p.m., he shot a woman in front of her children at an apartment complex parking lot, prosecutor Jeffrey Getting said. The woman was struck multiple times but is expected to survive.

Four hours later, the gunman killed a father and son at a car dealership, police said.

Minutes afterward, he drove to a Cracker Barrel restaurant and opened fire in the parking lot, killing four women and wounding a 14-year-old girl.

Two of the shootings were captured on video, Getting told CNN on Sunday.

"These were very deliberate killings. This wasn't hurried in any way, shape or form," said Getting, who has reviewed the video with police.

"They were intentional, deliberate and, I don't want to say casually done. Coldly done is what I want to say."

What we don't know:

How the gunman chose the victims.

"There is this sense of loss, anger (and) fear," he said. "On top of that, how do you tell the families of these victims that they were not targeted for any other reason than they were a target?"