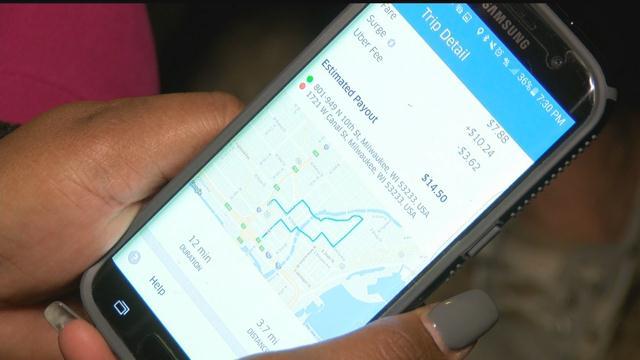 A second Uber driver who could be connected to the fatal crash on Sunday spoke to CBS 58.

This Uber driver said she picked the three friends up at the Journeyman Hotel at the start of the night, but it ended with her unknowingly picking up one of the suspects.

Still so shook up she didn't want to go on camera, this Uber driver said she drove past the crash and a few minutes later a request for a driver.

“I didn’t know it was him I was picking up because I couldn’t see that far over,” said the Uber driver.

When she got to the court house…she says her customer was hiding in the shadows.

“He had heavy beard and it looked like white dusty dirt and I’m looking at him like why are you dirty,” said the Uber driver.

She said the man told her he had just got into a fight with his brother and spent most of the ride on the phone.

“He was crying here. And I’m like something else happened here besides an argument with his brother,” said the Uber driver.

He told her he needed cigarettes, but it turned into a 12 minute ride with no real direction.

“He said can I pour my heart out to you? We were just doing molly and I just don’t know what happened and I’m like what happened what is going on,” said Uber driver.

The trip ended with him being dropped off at the Double Tree Hotel. This driver says-the trip rattled her.

Police say they are still searching for the second suspect.