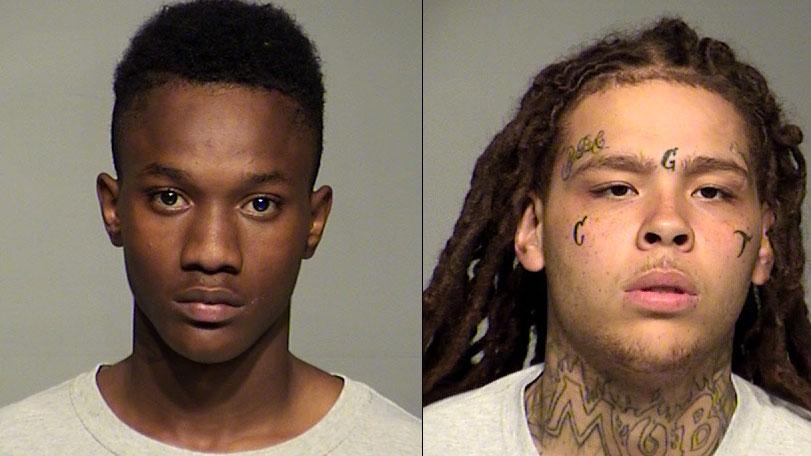 Two Milwaukee men have been charged for a four day crime spree that included kidnapping a baby, carjacking a Toppers delivery driver, and shooting four men.

One of the victims was a Toppers delivery driver. On May 21, the victim was delivering a pizza at 1620 North Marshall Street around 1:20 AM. The victim believed the suspects were going to hit his car with their vehicle so he jumped in between two parked vehicles. Two suspects exited the vehicle and ran in his direction. The victim tried to run away when he felt a blow to the back of his head. The suspects then kicked and punched in the head the Toppers delivery driver. They demanded his keys. The victim said he threw his car keys and balled up in a fetal position to protect himself.

Around 11:50 PM on May 21, a victim had just left work when he was rear ended on South 30th Street. He told police he got out of the vehicle, and he observed the vehicle that hit him was a maroon Grand Prix. The passenger had a gun and demanded his keys to his vehicle. In addition to his car being taken, the man’s wallet and iPhone were in the car.

Around 1:00 AM on May 22, officers were dispatched to a Shotspotter call in the area of 1810 West North Avenue. The officers were flagged down by a man who said he was shot numerous times at the intersection of North 18th Street and West North Avenue. According to the victim, he was driving when a gray mini-van and Grand Prix sped up in front of him and then struck the front passenger side of his vehicle and came to a stop. He got out of his vehicle and went up to the mini-van to get information. When he approached he observed a woman in the driver’s seat and three young children in the van. He asked the woman if she was injured and she ignored the man and exited her vehicle. She then went over to the Grand Prix and started pounding on the window and yelling “Let me in, Let me in.” She then got into the vehicle and another person drove the mini-van.

He then went to the Grand Prix and asked if he could get the woman’s information. The driver of the Grand Prix retrieved a handgun. The victim began walking away from the Grand Prix, and the rear passenger got out of the Grand Prix. The man pointed a gun at his stomach. When he was running away he heard numerous shots being fired.

On May 23 around 6:35 AM, a woman was struck from behind in her vehicle. The men exited their vehicle and forcefully pushed her out of the way and entered her driver’s side of her vehicle. The victim pleaded with the individuals not to take her vehicle because her child was in the car. The car took off and then stopped and put the baby in the grass on 5619 West Montana Street.

Three Men Shot by Man Running At Them:

On May 23, a man said he was standing out in front of 2630 West Medford Avenue with three friends when a person came out of the gangway screaming. The individual screamed, “You know what time it is!” The victim then heard gun shots being fired. The man was shot in his left forearm. Another man was shot in the middle of his back and right wrist. And a third victim was shot in the chest as he was jumping off the porch.

On May 24, a man walking in an alleyway in the 2100 block of North 27th Street was approached and robbed at gunpoint. The men took his Bally shoes and belt.

Later that day, officers observed Avan Kittler wearing the shoes and the belt at a residence. The officers were at the residence to arrest Matthew Long.

According to the complaint, Kittler confessed to police for each of the incidents.